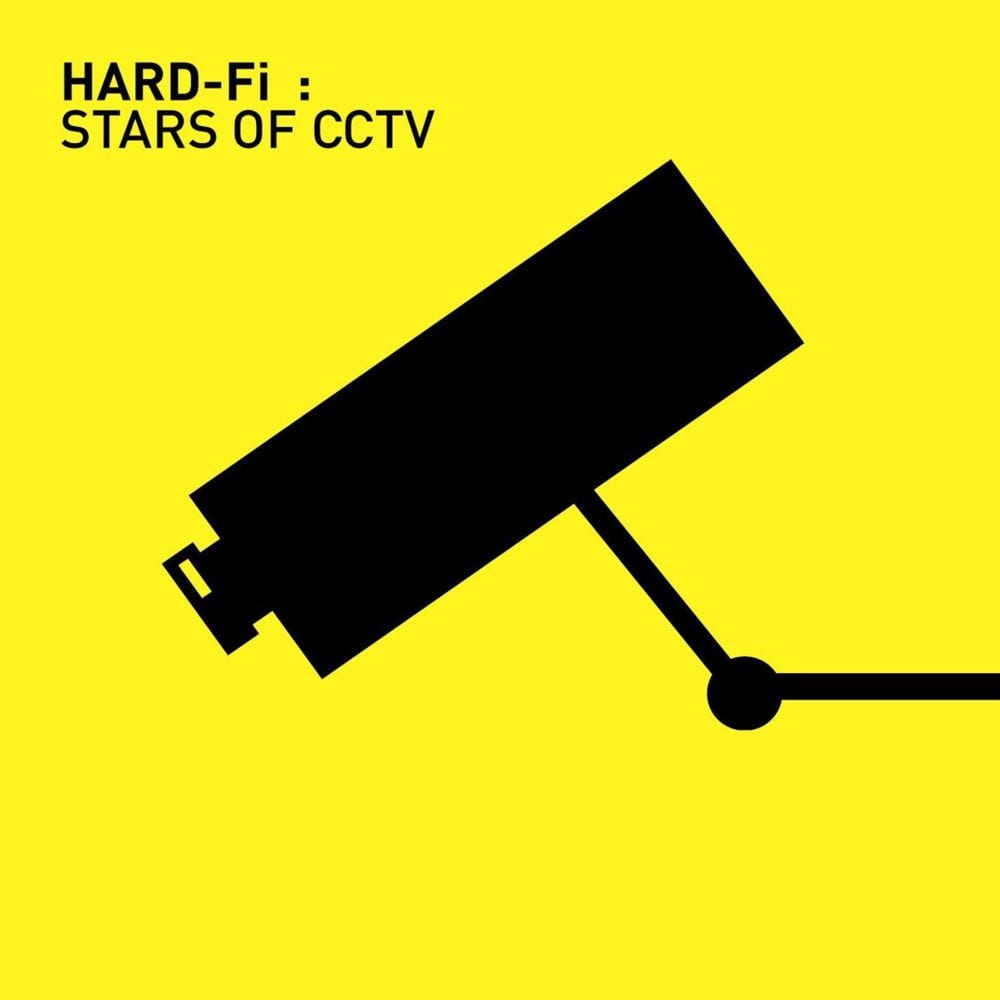 Whilst sadly the fame and fortune wasn’t that long lived (the second and third albums couldn’t match the brilliance of this and with the band on seemingly indefinite hiatus nobody seriously expects any more from them), Stars Of CCTV, the debut album from Staines four-piece Hard Fi, is one of the most complete and brilliant pieces of music I’ve ever heard.

When you’re in your early twenties with no decent job, no decent prospects and no decent life experiences, you might wonder what there is to write about. It comes as no surprise that Stars Of CCTV has its fair share of autobiographical songs about the mundanity of living in an ugly satellite town* wedged between the M25 and Heathrow Airport. Cash Machine (being perennially short of money), Living For The Weekend (just making it to Friday) and Hard To Beat (getting lucky on the dance floor) fit the genre, but if you think this is an exercise in the vacuous, you couldn’t be more wrong. As well as the above, there’s the beautiful solo piano of Move On Now, a song about escaping the mundane and Better Do Better, a vicious attack on a relationship that turned south. There’s other serious stuff too: Middle Eastern Holiday chronicles a friend sent to fight the Iraq War under a tenuous remit. Feltham Is Singing Out is loosely based on the story of Zahid Mubarek, a drug user who served time at Feltham Young Offenders Institution but who never left – he was beaten to death in his cell in a racist attack. The title track takes a swipe at the insidious creeping prevalence of Government and corporate surveillance on the streets. When arch man of the people Billy Bragg picks up on and applauds your work, you know your social commentary must be hitting the spot. The band thanked Bragg by inviting him to open for them on tour.

Stars Of CCTV was recorded in a disused taxi booking office in Staines for £600. Urban myth has it that you can hear street sirens and passing Heathrow departures in the soundscape, though I’ve never heard them and I’ve listened to this album a lot. It has fantastic artwork – use of the CCTV camera graphic was genius given it’s a ubiquitous image that’s implanted in the subconscious of modern Britain – permanent advertising at a molecular level. The album was nominated for the Mercury Music Prize in 2005, a worthy recognition of its excellence. It didn’t win, but what the hell do they know? It’s one of very few records that engrosses me from start to finish and I will never tire of it. I commend it to the house.

* With apologies to any proud residents of Staines.

Stars Of CCTV by Hard Fi, originally released in 2005, chosen by photographer and writer Simon Reed

I am a music, event and portrait photographer, shooting pictures mainly in London and on the South coast. I tend to like bands with guitars - they move about more. When I'm not photographing music, I write about it and sometimes conduct the odd interview. Also in occasional spare moments, I control air traffic and walk Zebedee, Florence and Dougal, the springerdoodles.

I met Green Gartside once...at Green Man Festival in Wales...he posed for some pictures I took...I was gobsmacked and could not think of two words to say to him. For me it was a totally overwhelming experience just being face to face with him. I had just listened to...

END_OF_DOCUMENT_TOKEN_TO_BE_REPLACED

I’ve chosen The Whole Story by Kate Bush  - I know that makes me a horrible philistine to choose a greatest hits but I don’t care! One of my dearest and oldest friends Lucy gave this to me on CD for my 15th birthday and I was like ‘What? the Wuthering Heights woman?…...

END_OF_DOCUMENT_TOKEN_TO_BE_REPLACED

Laurel perfectly encapsulates what it’s like to be a music maker in today’s landscape of artists with more control over their sound. Her 2018 debut album Dogviolet struck me with a deep level of confidence in both vocal delivery and performance that few artists are...