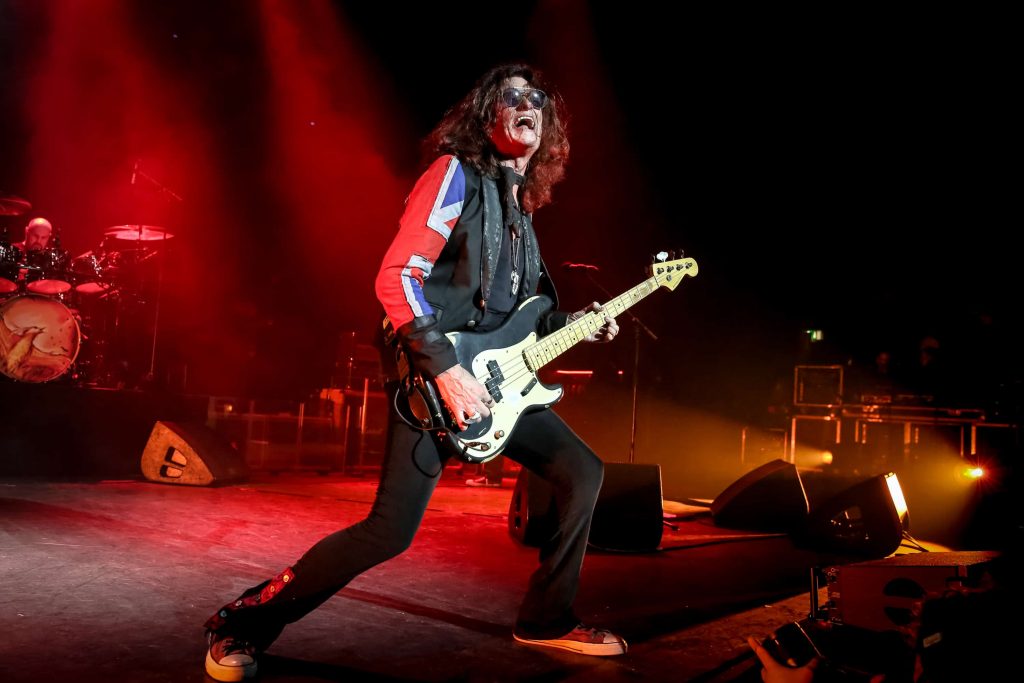 Best known for his time with Dream Theater, the six-packed Derek Sherinian is one of those players who can sprinkle a delicate keyboard melody onto the end of Sway or lean into the mellotron swells of a thunderous The Outsider with equal flair.

Jason Bonham is such a seismic performer that Hughes admits he sometimes can’t tell the difference between him and his father, Led Zeppelin’s John Bonham, undoubtedly the greatest rock drummer of all time.

Freed up of having to belt out every song, Joe Bonamassa can focus on reminding people that he’s the finest blues-rock guitarist of his generation. So, despite playing harder and heavier than his solo shows permit, he doesn’t even break a sweat on such heavy hitters as brutal funk-rock opus The Crow and swaggering Man In The Middle. 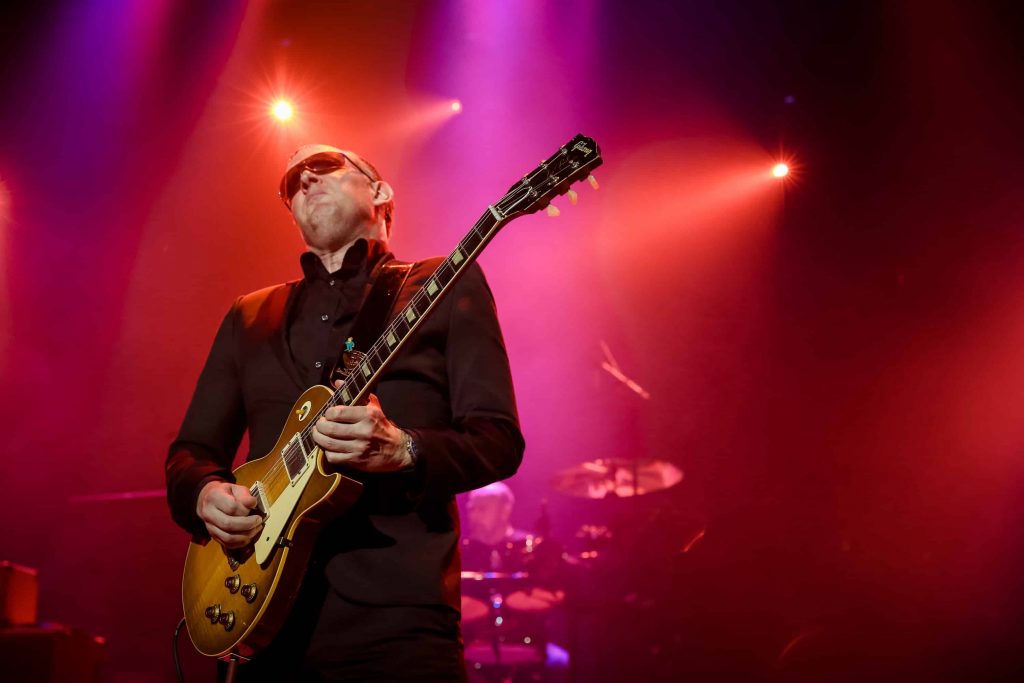 And, even 50 years into a career signposted by legendary names like Deep Purple and Black Sabbath, the evergreen Hughes isn’t one for resting on his laurels. Front and centre on the Hammersmith Apollo stage, brandishing his bass guitar like a weapon, he still struts, pouts, and hits the high notes like it’s 1974.

But musicians each so uniquely talented don’t always play well with others. Which is where that friendship comes in. They’re bonded by long-term relationships, Hughes at one point revealing he’s known Bonham since the drummer was in nappies. There’s an obvious joy in their reunion too, with hugs aplenty and a contrite Bonamassa confessing he’s thrilled to rejoin, in his words, “three of the best musicians he’s worked with”. 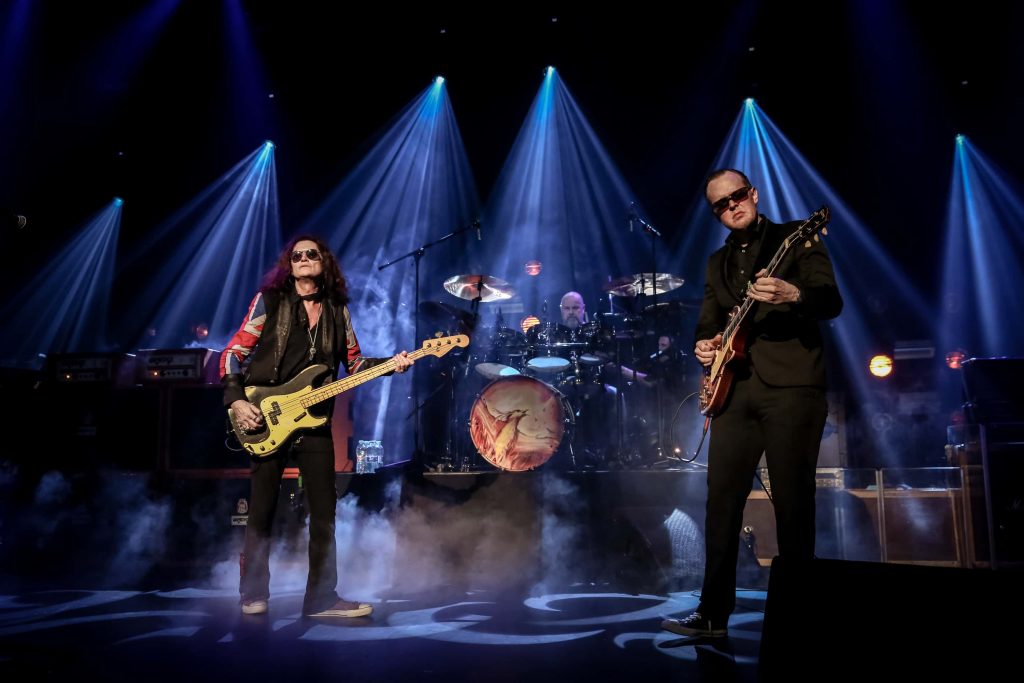 It all adds up to the four men playing not as individuals but a group. There’s no one-upmanship, no self-indulgent showboating. They’re simply serving the songs, while delivering a set as barnstorming as the show-opening air raid sirens promise.

Drawing primarily from their first, second, and current fourth LP, there are outright classic rock anthems like the effortless One Last Soul, the soaring Over My Head (the only song Hughes has literally written in his sleep), the hip-swaying Collide, and the galloping Black Country (topped by some magnificent interplay between the bassist’s towering vocals and the guitarist’s bleeding-heart blues licks only surpassed by a similar exchange on tonight’s rendition of Deep Purple’s Mistreated).

There are the protean epics that, through their changes in time and intensity, truly highlight the close relationship between the musicians and, in the live setting, consistently eclipse the studio renditions. Like Save Me, which begins in quiet, moody atmospherics before a big Bonham beat and chunky guitar riff pave the way for soaring vocals, lavish keyboard flourishes, and fluid Bonamassa soloing.

Or Cold, its spell of crying blues guitar, subtle organ fills, and tear-stained vocals briefly broken by a guitar solo that brings with it more power, pace, and passion. Or the irrepressible Wanderlust which, anchored by Sherinian’s keys, bounds through almost 10 minutes of powerhouse singing, audience clapping, free-flowing Les Paul solos, and some organ flamboyance without overstaying its welcome. 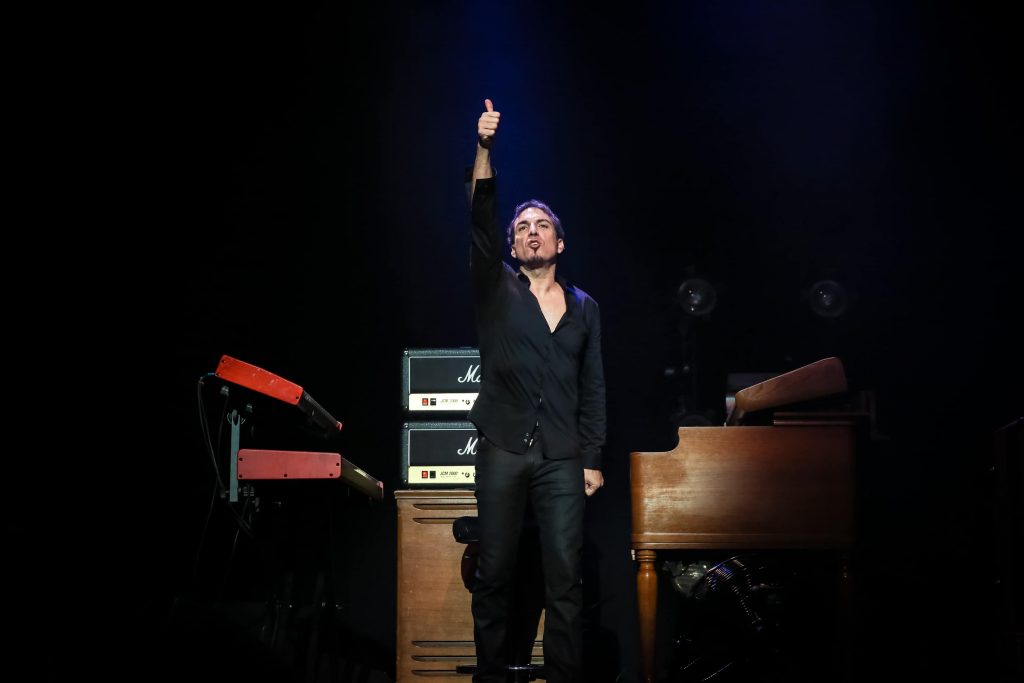 And there are the big-scale “Joe songs”. Song Of Yesterday, which has occasionally made its way into Bonamassa’s solo sets, sounds more dramatic than ever as it segues between musically and vocally restrained verses, earth-shaking choruses (featuring a few choice lines from Hughes), and some of the guitarist’s most confident playing on what must be the night’s longest six-strong solo, before returning to the calm with which it all began.

The Last Song For My Resting Place, one of the highlights of last year’s BCCIV album, is even more ambitious. With the help of Gerry O’Connor on mandolin and fiddle, its eight minutes tell the story of the violin that played as the Titanic sank and are a masterclass in turning on a dime. Essentially an adrenalised power ballad demanding restraint from all five performers, its centrepiece is two minutes of drama and darkness as intense and heavy as anything in their repertoire.

Like everything else about the show, from the crystal clear sound mix to the classic lighting design, they pull it off with near-perfection. 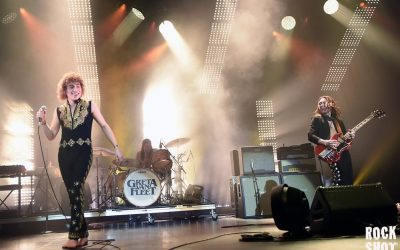 There is no better way to end a great year in music then being a part of one of two incredible nights in Philadelphia with what many call one of rocks true sensations known as Greta Van Fleet.   Hard to believe just five years ago they started to make our musical...

END_OF_DOCUMENT_TOKEN_TO_BE_REPLACED 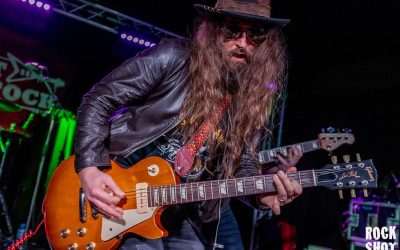 The Bands & The Caravans Rocked At Planet Rockstock 2019

END_OF_DOCUMENT_TOKEN_TO_BE_REPLACED

So what happens when a band like The National, beloved for theatrical concerts where the audience sings along to every one of Matt Berninger’s sad lyrics, tours with an album such as their latest release I’m Easy To Find, a more arty, less commercial sounding record?...