After a two and half year gap from live performances due to the pandemic, it seemed only right that Florence + The Machine’s first London show since blowing up Hyde Park as part of BST 2019 should take place in the rather intimate confines of Dury Lane’s Theatre Royal. 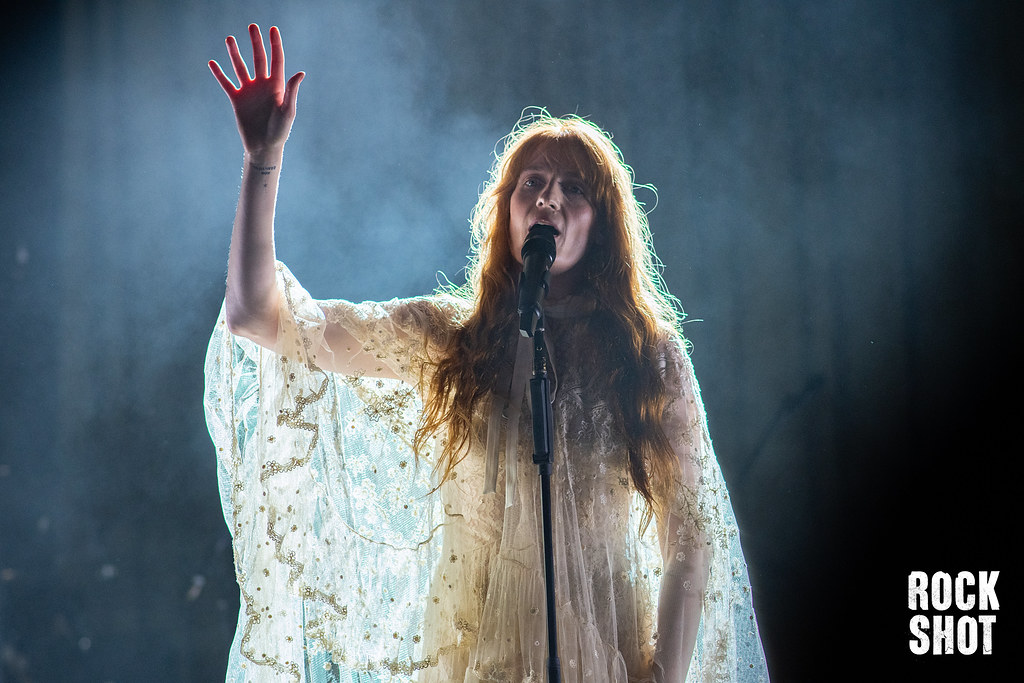 Florence Welch & co. are back on May 13th with fifth album Dance Fever – touted as sounding like her 2009 debut ‘Lungs’ but “with more self-knowledge”. And in preparation for a much larger tour that continues with further intimate shows in Los Angeles and New York later this month before making its mark on the European festival scene over the summer, ahead of a full-on arena tour across the US, UK and Ireland, tonight felt just right. 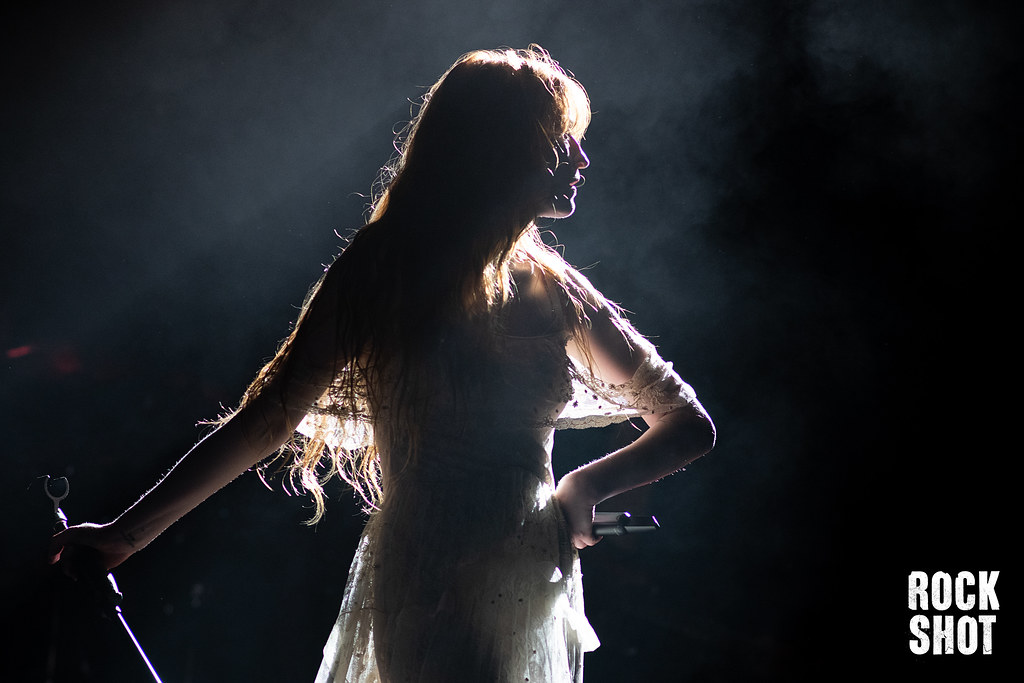 Dance Fever itself went into production just as the pandemic hit the world with all of its disruptive force, but how much of the album’s contents diverged due to that versus the themes already laid down by Welch is a question for her.
In a recent interview with British Vogue Welch went into depth about the pull of motherhood, the limited time she might have to pursue that calling alongside the need to pump out the songs that make up Dance Fever given the confidence as an artist she now embodies five records deep into an undeniably enormously successful career. 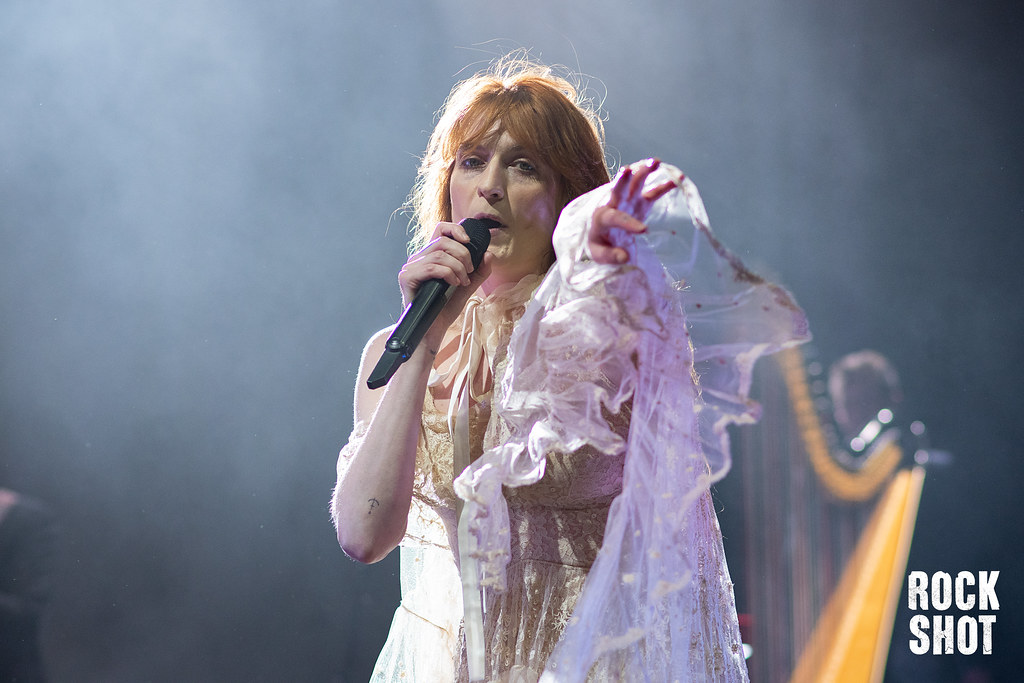 Tonight’s 2,196-capacity sold-out show kicked off with 2011 record Ceremonials lead single Shake It Out, starting the night out in a suitably raucous fashion before latest Dance Fever cut King is aired, the die-hard fanbase of tonight’s audience already belting the words along. All five of her albums are touched upon over the course of the 18-song set, with the new material garnering as much of a response as the more well-known. 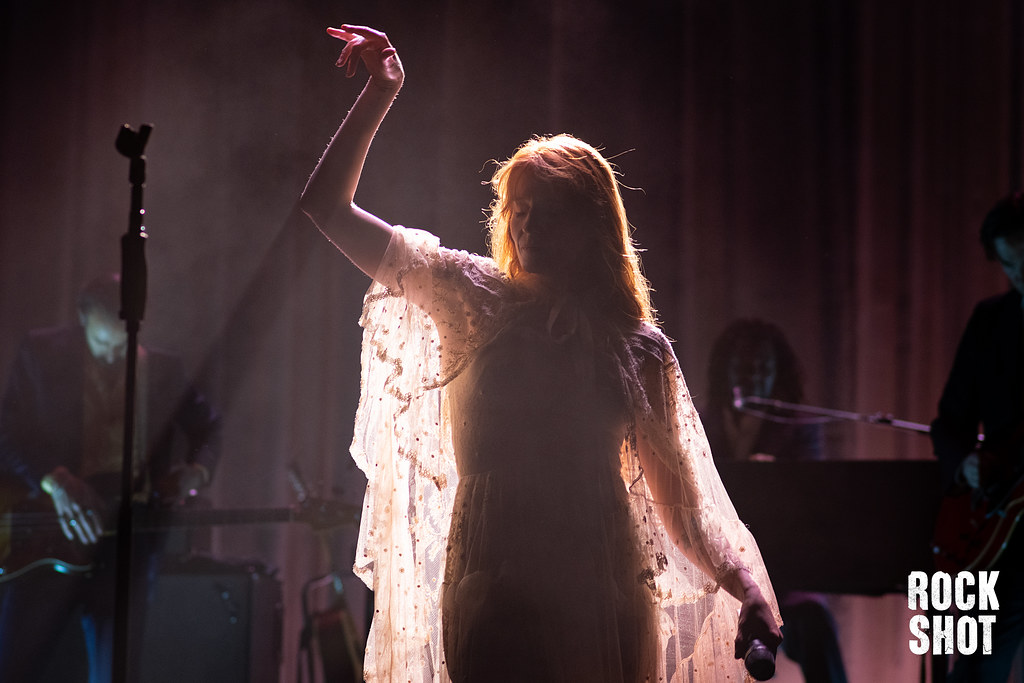 The patiently-seated crowd search around to collectively agree when the moment will be when they can comfortably leave their seats for the duration of the evening. And it takes just one and a half songs to reach that decision to be made, for the majority of the crowd to rise to their feet, much to the joy of the enigmatic Welch who bounds across the stage, grinning, barefoot and in a flowing white dress she is now so renowned for, that much of tonight’s fanbase have attended emulating her. 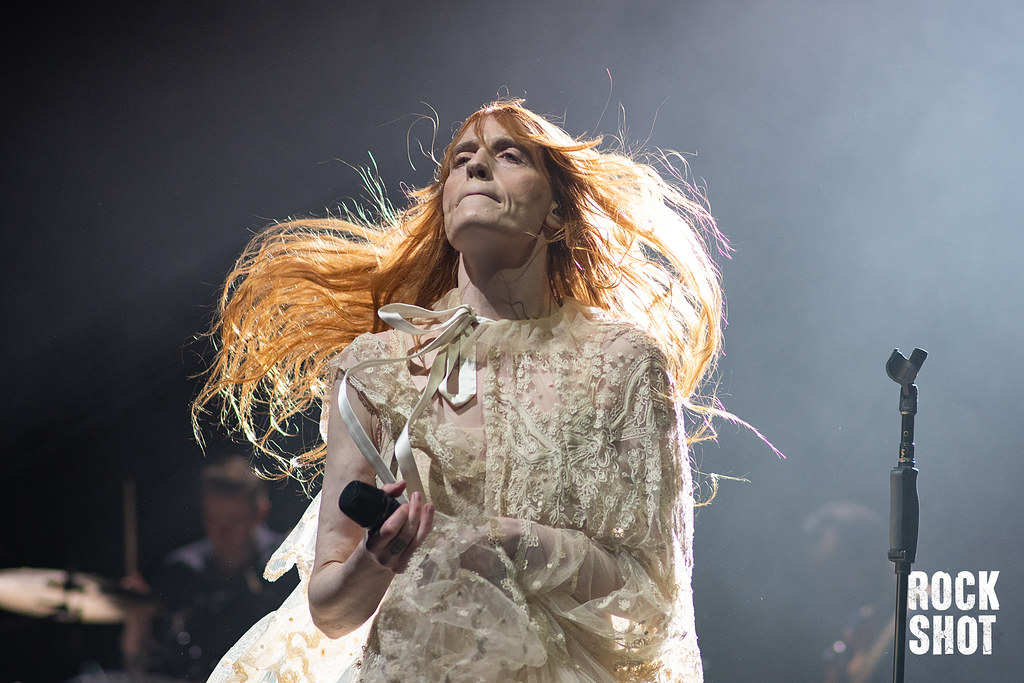 “Only at a Florence + The Machine show do I get whistled at for putting my clothes back on!” Welch jests at the crowd’s response as she pulls her “cape” back on and hugs it tight around her. And she’s right. There is a demographic here tonight that is atypical of perhaps most currently touring pop or rock acts. Where age, race or sexual identity don’t seem to influence nor deter concert-goers. 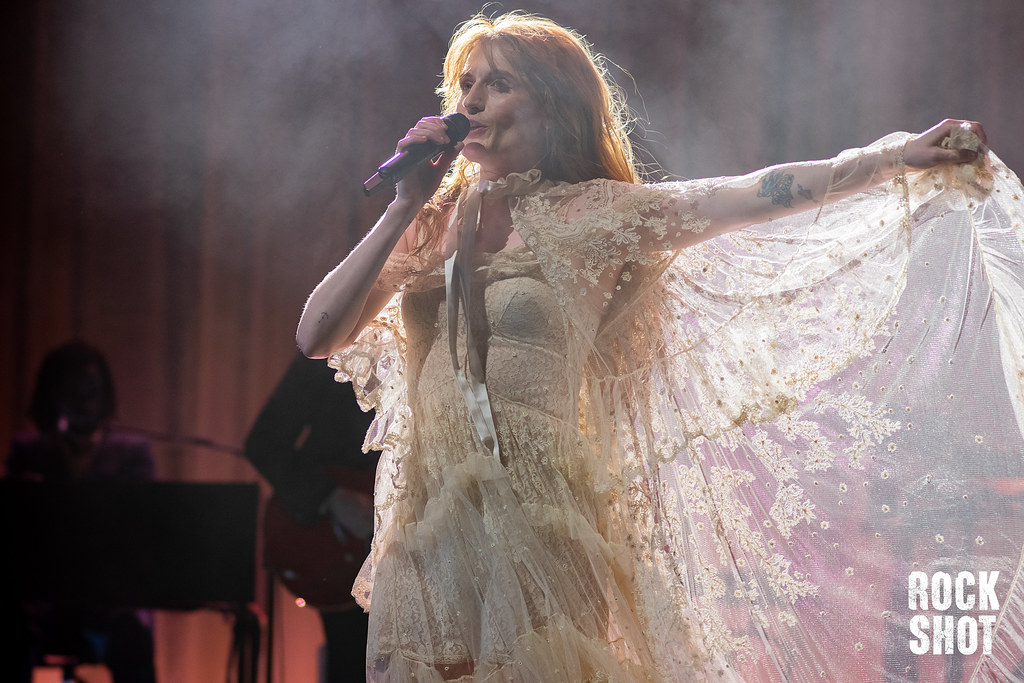 Ceremonials cut Never Let Me Go is introduced by the singer as an example of a song she has tried to push away, but which resonates with her fans the most. It’s also very difficult to sing, she jests to a chuckles from an adoring audience. 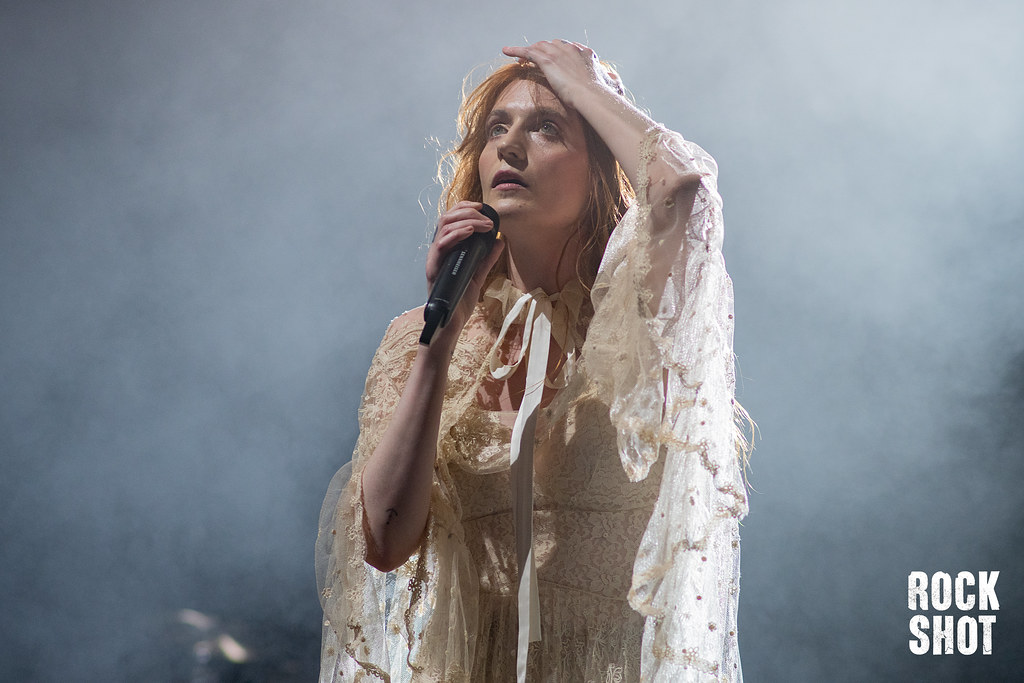 The 35-year-old has fans turning their phone lights on to illuminate quiet moments as she also calls out to a pair of fans who met years ago in line for one of her shows and who now have become engaged. Equally, ahead of closing out the night with blistering Lungs single Dog Days Are Over, she encouraged the crowd to put away their phones and let loose. To bounce along with the track in place (although recommended those stood on the 3rd level balcony to take that under advisement!), as she herself dove from one side of the stage to the other, reaching out to her fans as she did. 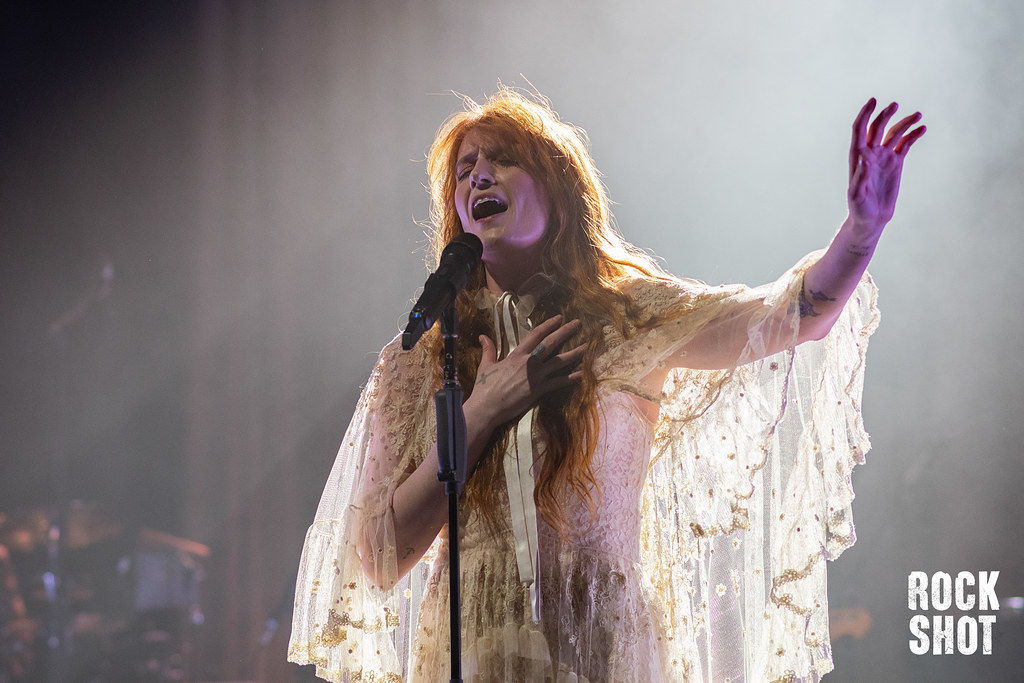 While nights at Alexandra Palace, The O2 and Hyde Park are now the expectation for an act as big as Florence + The Machine when playing in her hometown, it’s within the intimate surroundings of energy exuding venues such as the historic Theatre Royal that Welch and co. really shine and where audiences can truly engage and where Florence can truly engage with them.
Live review and Photography of Florence + The Machine @ Theatre Royal, Drury Lane by Kalpesh Patel on 19th April 2022.