British Stadium rock trio Muse brought it all to the first of two nights at the comparatively tiny Hammersmith Apollo in support of War Child and Médecins Sans Frontières and their current and on-going humanitarian work in Ukraine. The Devon-hailing group, more often seen amongst themed oversized props at stadium headline shows or topping the bill at any festival around the world went without the theatrics for a stripped-back run-through of hits, rarities and cuts from their forthcoming ninth studio album Will Of The People. 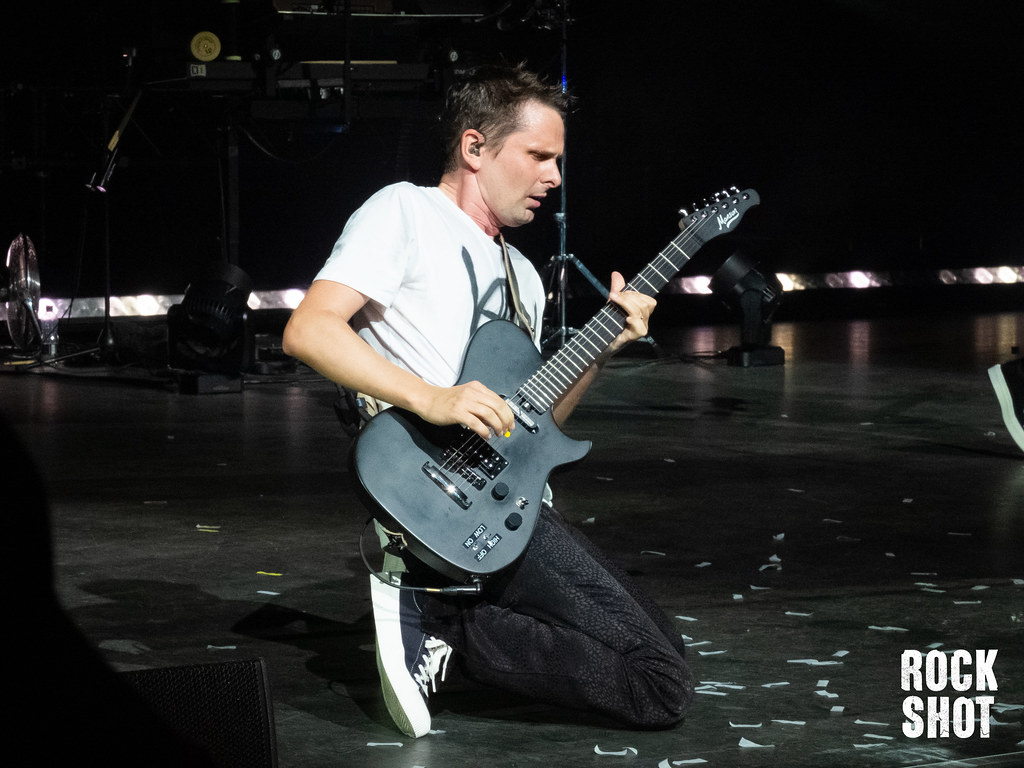 Appearing in a black and white patterned hoodie with the hood up, frontman Matt Bellamy led the trio through lead single from the new record Won’t Stand Down, the London crowd already familiar with the words and chanting along. 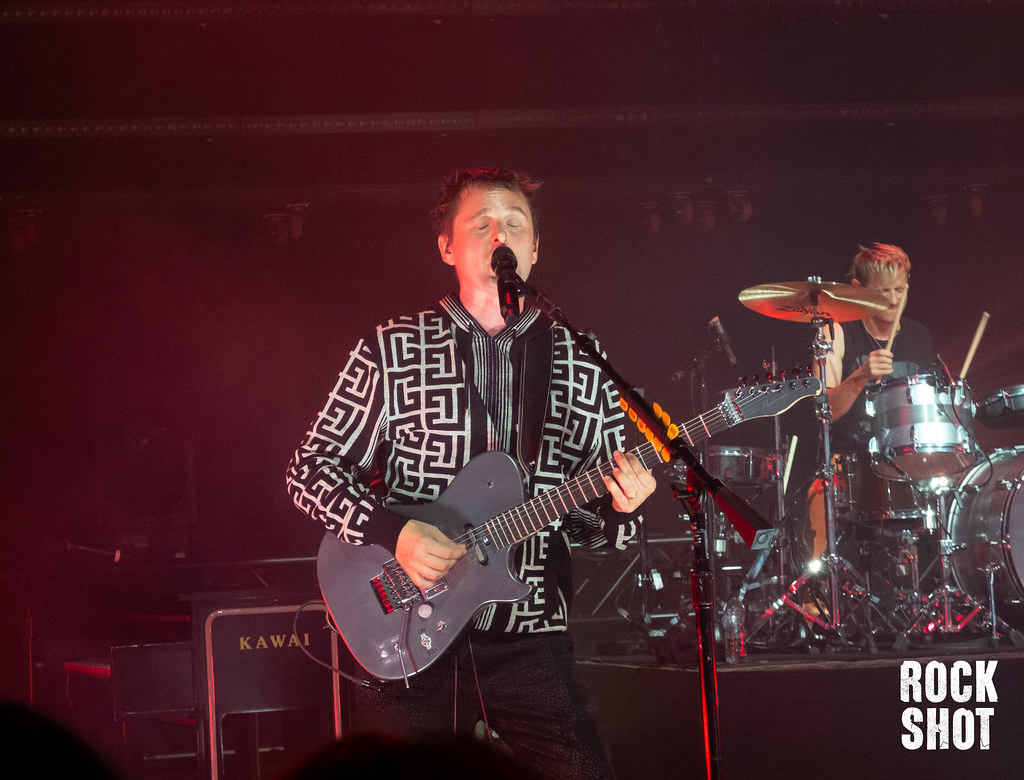 It wasn’t long before beer cups were thrown and the crowd surged with the opening bass riff of Hysteria from 2003’s Absolution hammered out expertly by Chris Wolstenholme charging headlong into Bellamy’s own stylistic guitar riff, the track rounded off amusingly to AC/DC’s Back In Black. 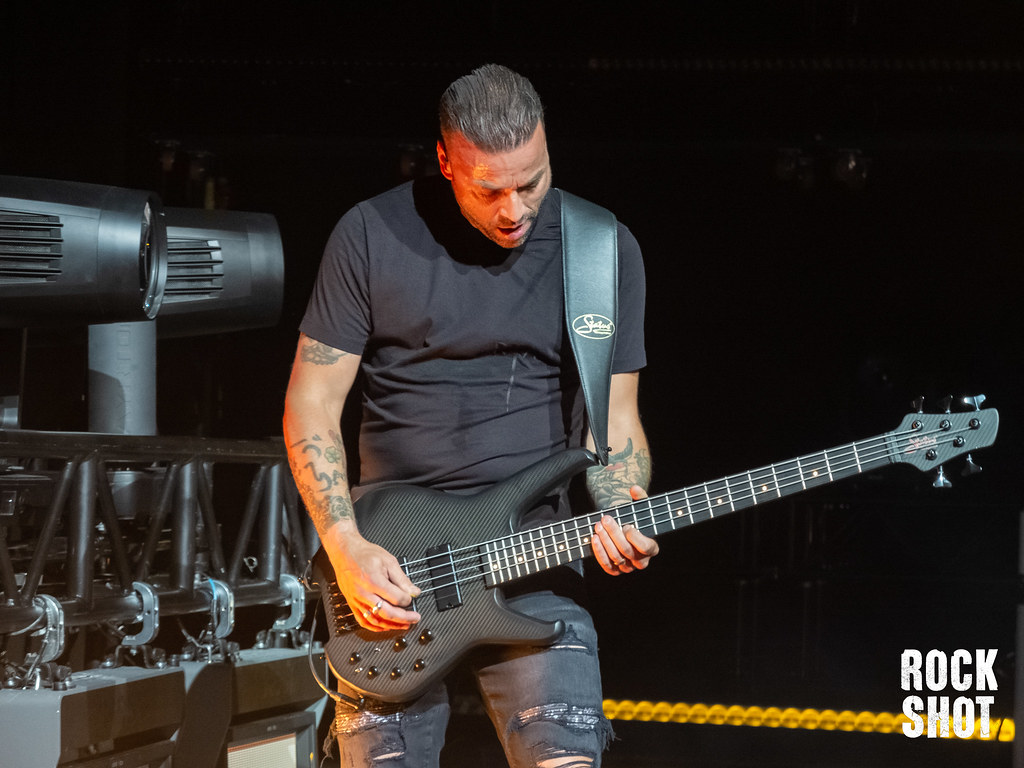 The singles came thick and fast as Bellamy shed his hoodie, revealing a white t-shirt emblazoned with the logo from Will Of The People. Simulation Theory’s Pressure was somewhat of a breather ahead of Origin Of Symmetry single Bliss. Drones cut Psycho had arms charging to the calls of “Aye Sir!”. 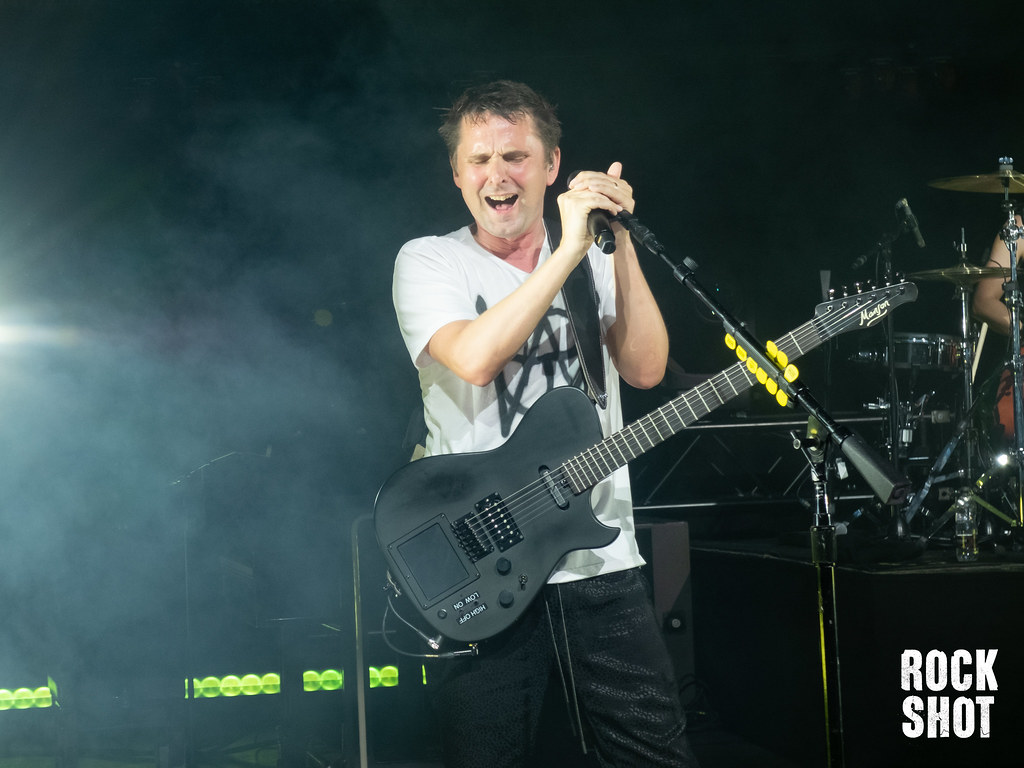 A re-energised rendition of Black Holes And Revelations track Assassin dubbed the “Grand Omega Bosses Edit” preceded what Bellamy described in one of his few addresses to the Apollo crowd as “The deepest of deep cuts” – instrumental track and Bliss b-side The Gallery, the Teignmouth trio offering up a rarity for the hardcore fans who had queued outside the West London theatre since the early hours. 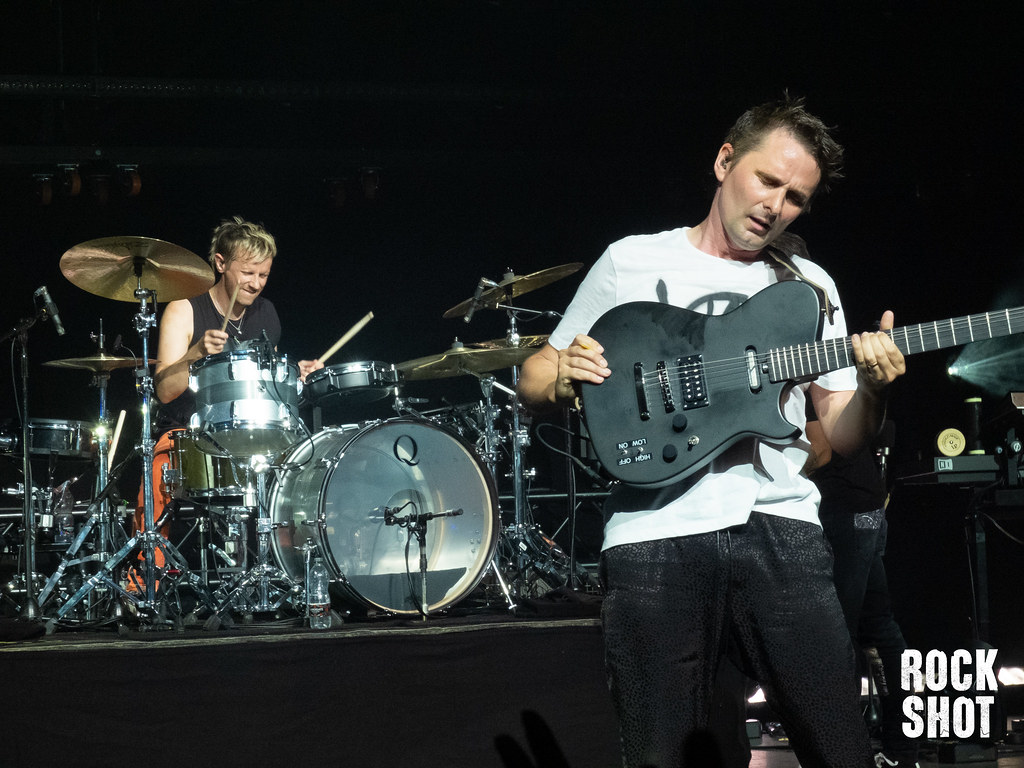 Latest single Compliance had the crowd singing along once again before Absolution lead single Stockholm Syndrome’s opening riff encouraged the crowd to surge. Bellamy sat down behind his Kawai piano to calm his audience with the soothing Prelude from 2012 record The 2nd Law. 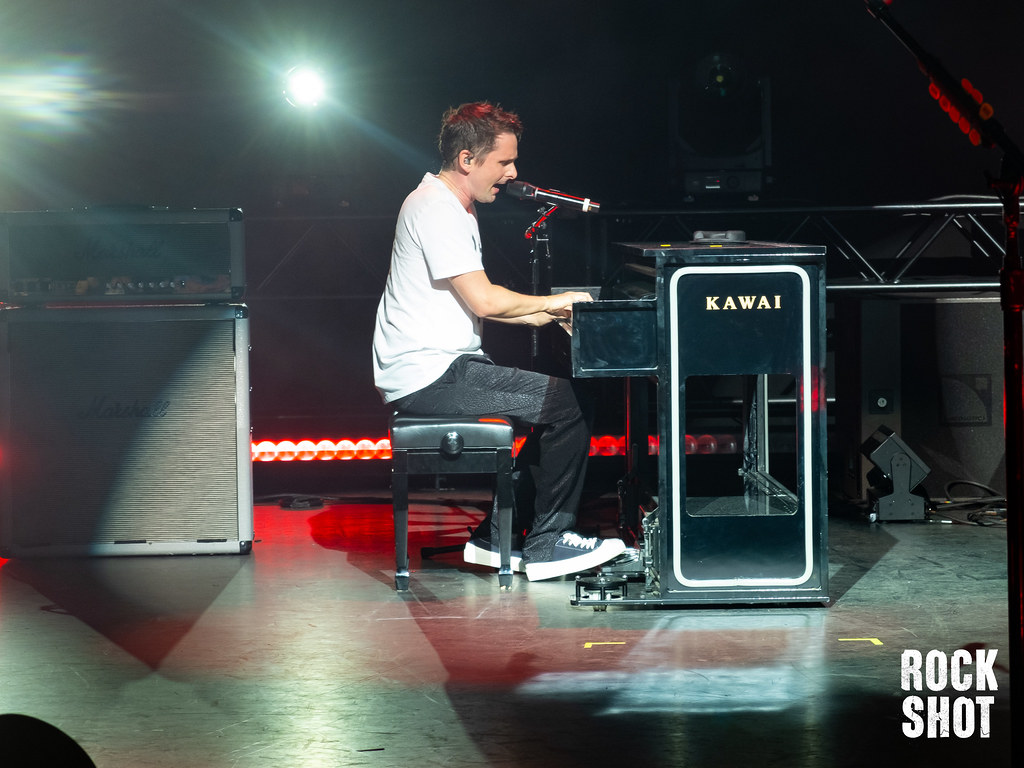 More from Absolution followed, Bellamy putting his guitar down to walk the stage for sing-along favourite Starlight, cannons in full force, covering the sweaty crowd with white paper confetti. The crowd bounced again prematurely as the opening riff to 2001 hit single Plug In Baby kicked off the Origin Of Symmetry cut, followed swiftly by the boombastic Citizen Erased from the same record, the circle pit in front of the barrier suitably charging. 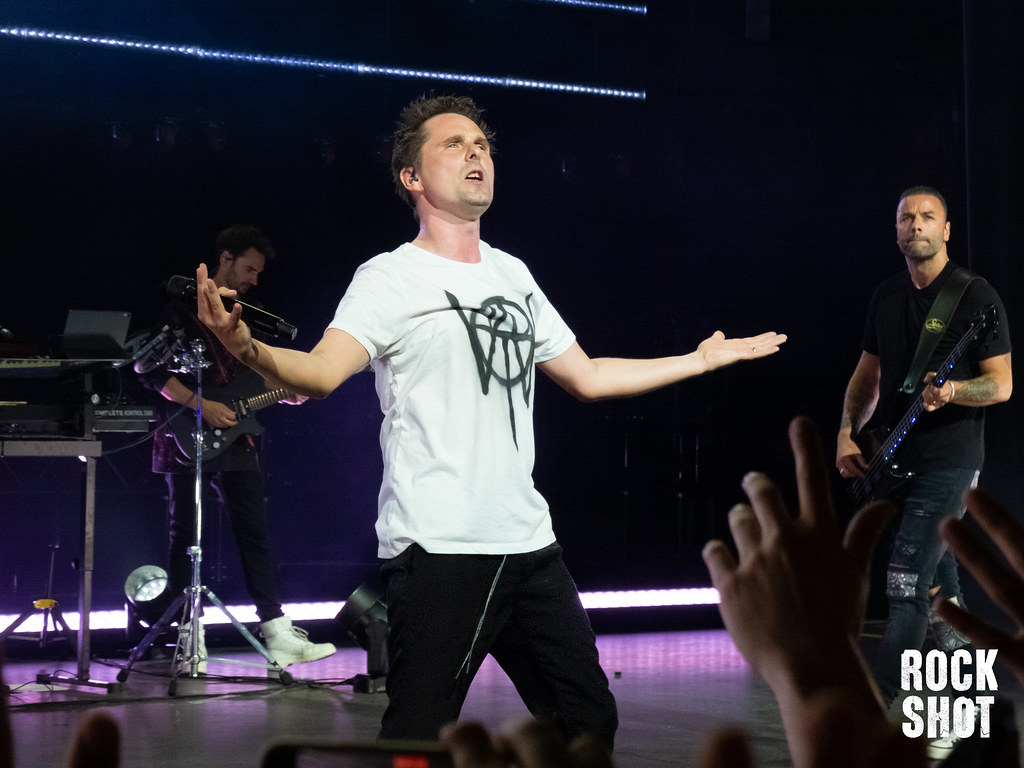 Supermassive Black Hole was next before The Resistance lead single Uprising closed out the main set, Bellamy dropping a beautiful custom red Manson guitar to the floor as the three men (plus Dan Lancaster on additional instrumentation) departed the stage for the briefest of pauses in the night’s proceedings. 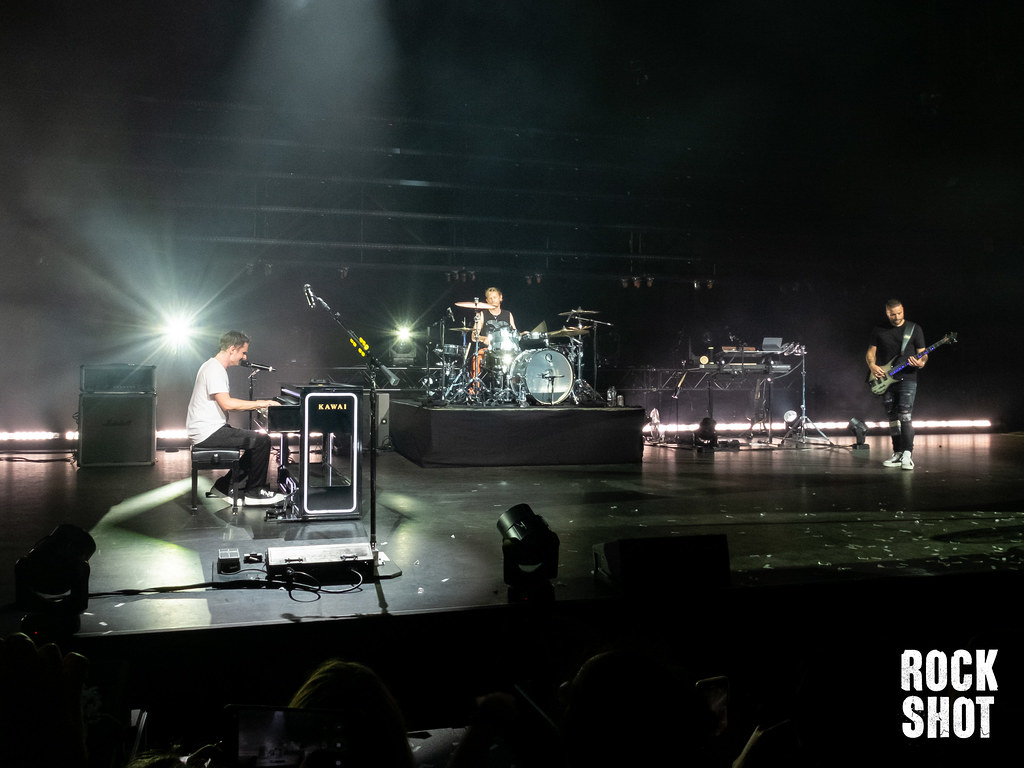 Bellamy & co. returned to the stage for a rare outing of Origin Of Symmetry tune Space Dementia, the group’s seminal second album itself having a special 20th anniversary re-mix released last summer and tonight’s rendition beginning with Bellamy’s famous symphonic piano skills and ending with the 43-year-old launching a second custom Manson guitar into the air, crashing forcefully to the stage floor. 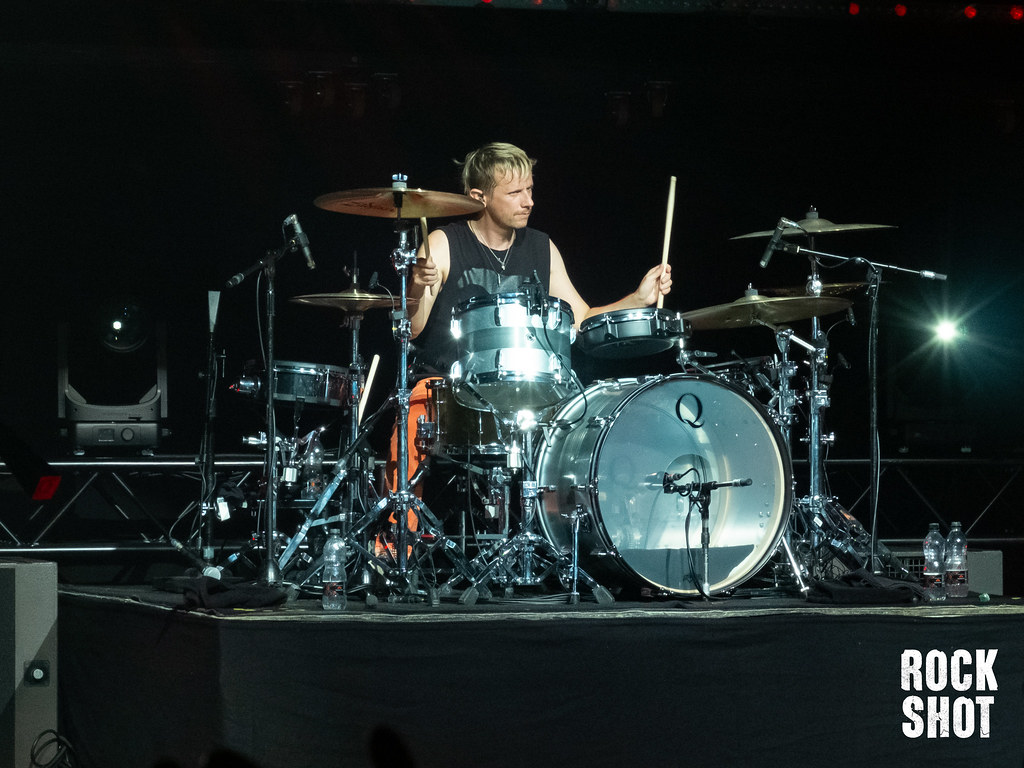 The night was rounded out with Chris Wolstenholme assuming his position behind a harmonica to play Ennio Morricone’s Man With a Harmonica, introducing the western-tinged Knights Of Cydonia, the guitar parts themselves influenced by number one hit Telstar by The Tornados, a group in which frontman’s father George Bellamy played rhythm guitar. 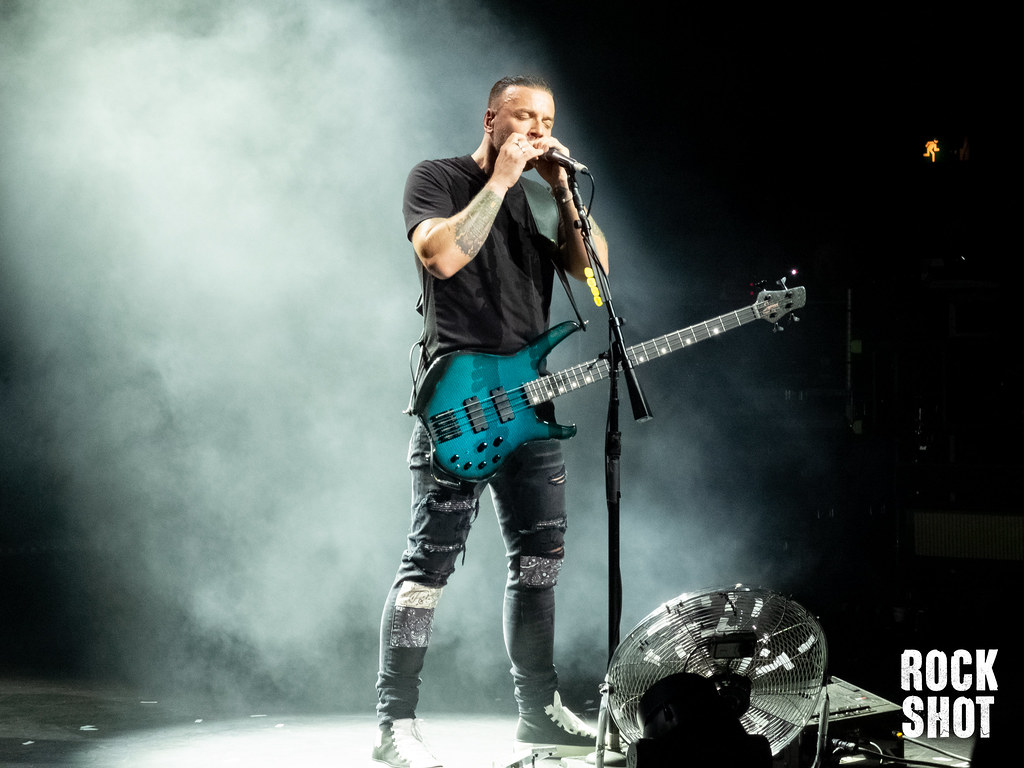 Muse really continue to be a tour-de-force in pushing the boundaries of rock and carrying the flag for Britain in leading the push of innovation in the genre, as they have done from day one. Tonight was another demonstration of just how forceful they have become over the years, just how diverse their catalogue is and what three (plus one) men on a simple theatre stage can put out. 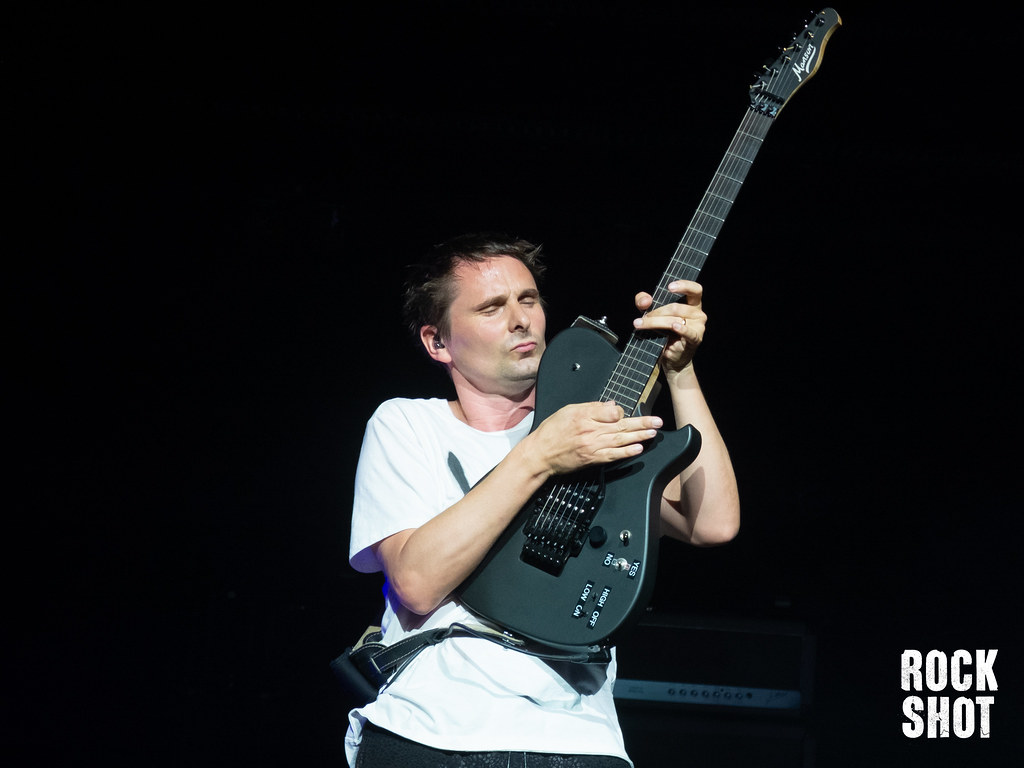 Muse release Will Of The People on 26th August and hit the summer European festival circuit including a stop at the UK’s Isle Of Wight festival on 19th June.
Live review and Photography of Muse @ Hammersmith Apollo by Kalpesh Patel on 9th May 2022.