It’s been a beat since Phoenix were on British shores – a good couple of years pre-pandemic, joining the likes of Glass Animals and the Yeah Yeah Yeahs supporting LCD Soundsystem’s headline show at London’s Victoria Park as part of the Capital’s All Points East festival series. 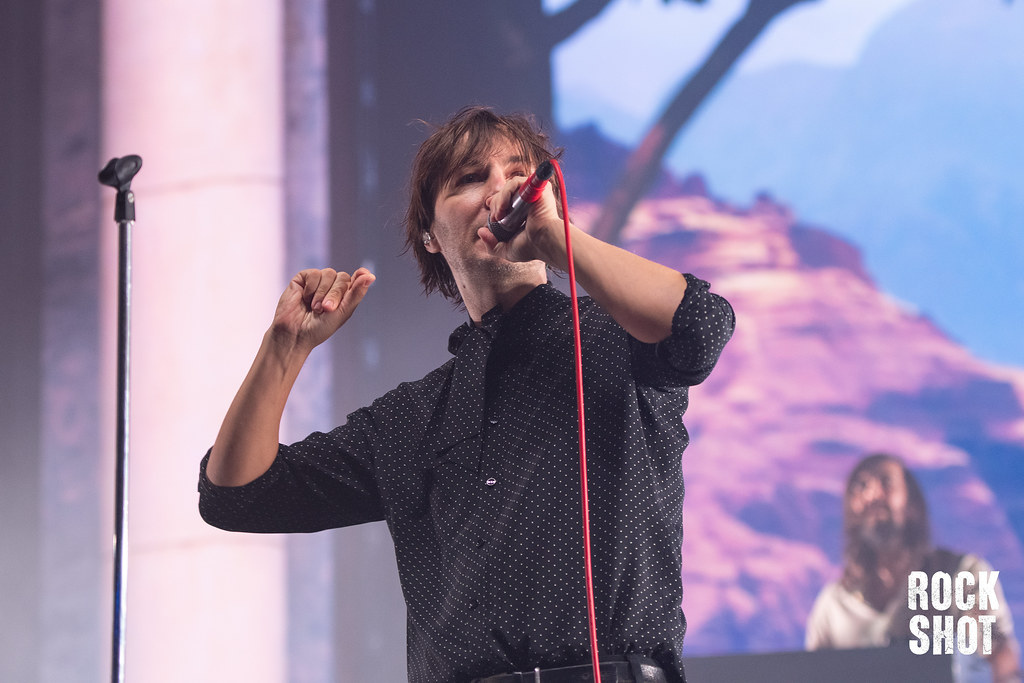 Having spent the intervening period, as many artists have, producing new music under unusual circumstances, the Versailles France-based band returned in 2022 with new record Alpha Zulu – recorded at Paris’ iconic cultural home: Louvre Palace. Following an extensive North American tour alongside a few European dates, they return to London for their only U.K. date of 2022. And where better to bring their unique blend of electro-pop-rockness than the Brixton Academy. 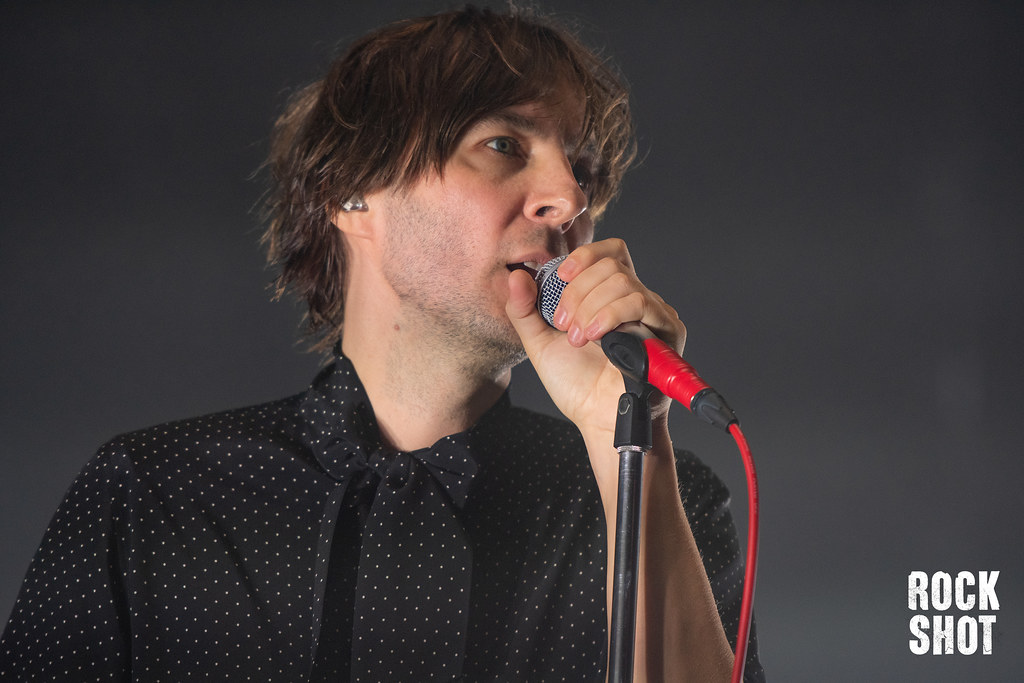 As soon as the four-piece (six, along with additional stage presence of Thomas Hedlund on percussion and Robin Coudert on keys) announce their introduction with some rather regal-sounding orchestral instrumentation followed by the opening licks of hit 2009 single Lisztomania, it’s clear tonight will lean into everything that draws crowds to their shows. 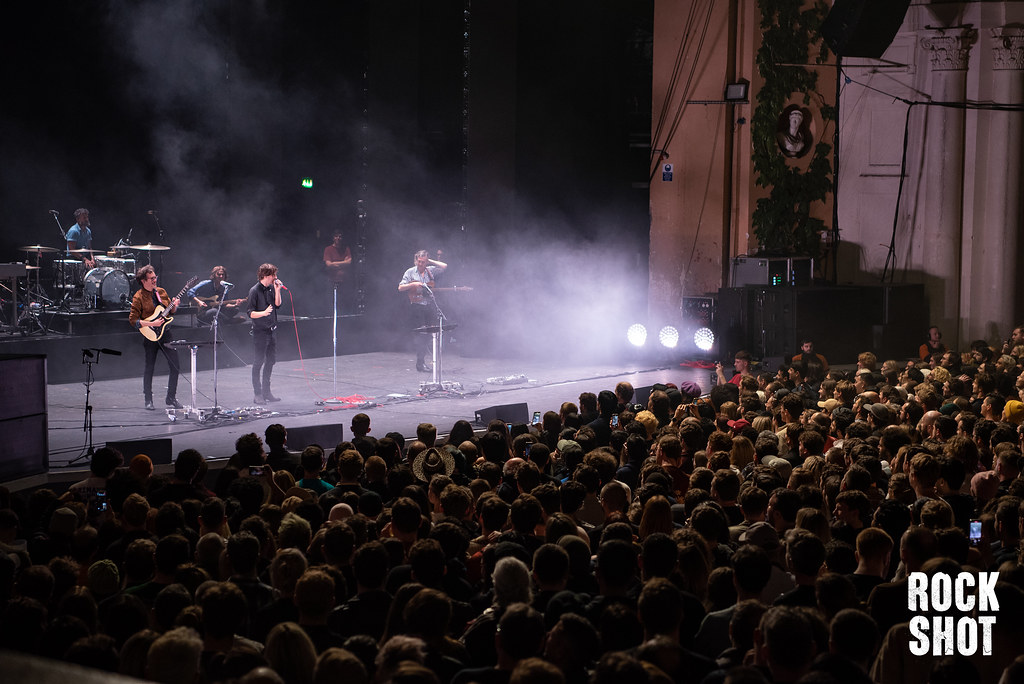 The stage is bright. And dark. Composed of stacked screens, layering backwards and framing the band, the image we start with on-screen is even more regal, an opera house perhaps? And frontman Thomas Pablo Croquet – AKA Thomas Mars – is off, his microphone attached to a sprawling red lead, affording him the ability to move about the stage with abandon. 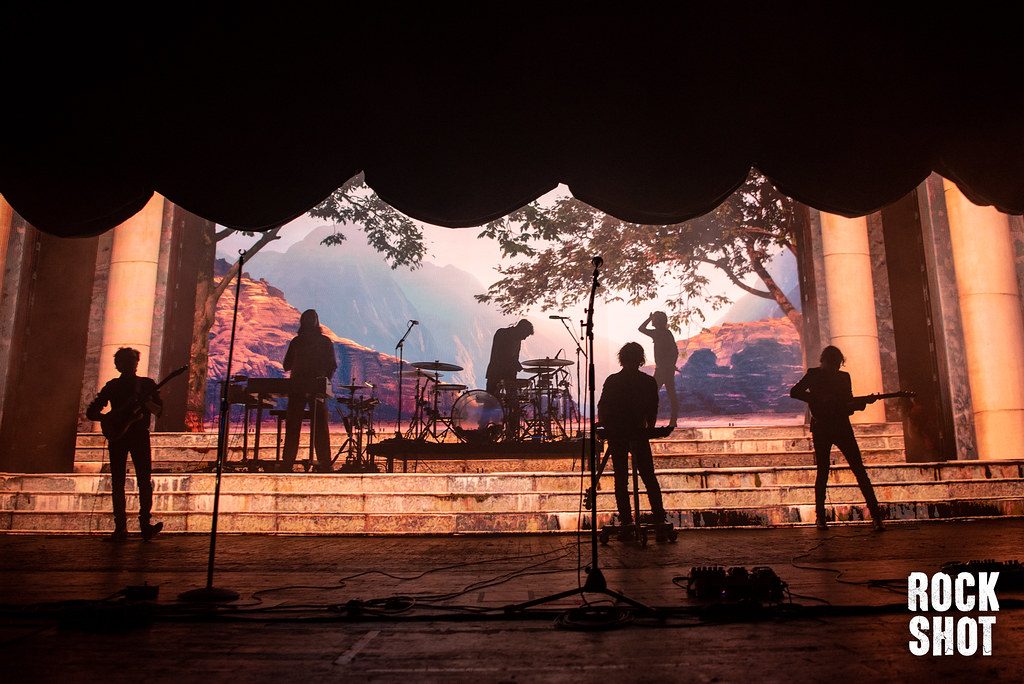 The oriental-sounding synths of Bankrupt! single Entertainment continues the bubbling, bouncy alt-pop, jangling guitar layers and storming beats have the Brixton crowd bouncing, and beaming as they do. Oh, tonight is going to be a fun and sweaty affair! 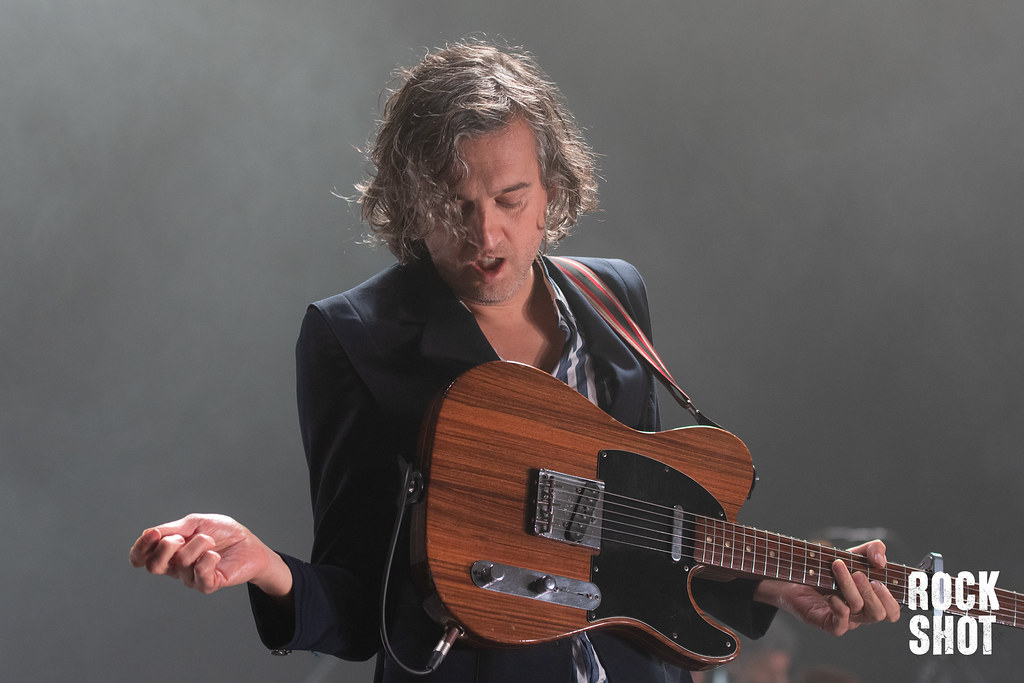 The hits keep coming with more from breakthrough 2009 record Wolfgang Amadeus Phoenix next by way of the album’s final single Lasso. Guitars from band mainstays Laurent Brancowitz and Christian Mazzalai layering so gloriously throughout the group’s hooky pop-rock anthem. “London, Bonsoir!” Mars shouts across an instrumental break, to cheers from his audience. 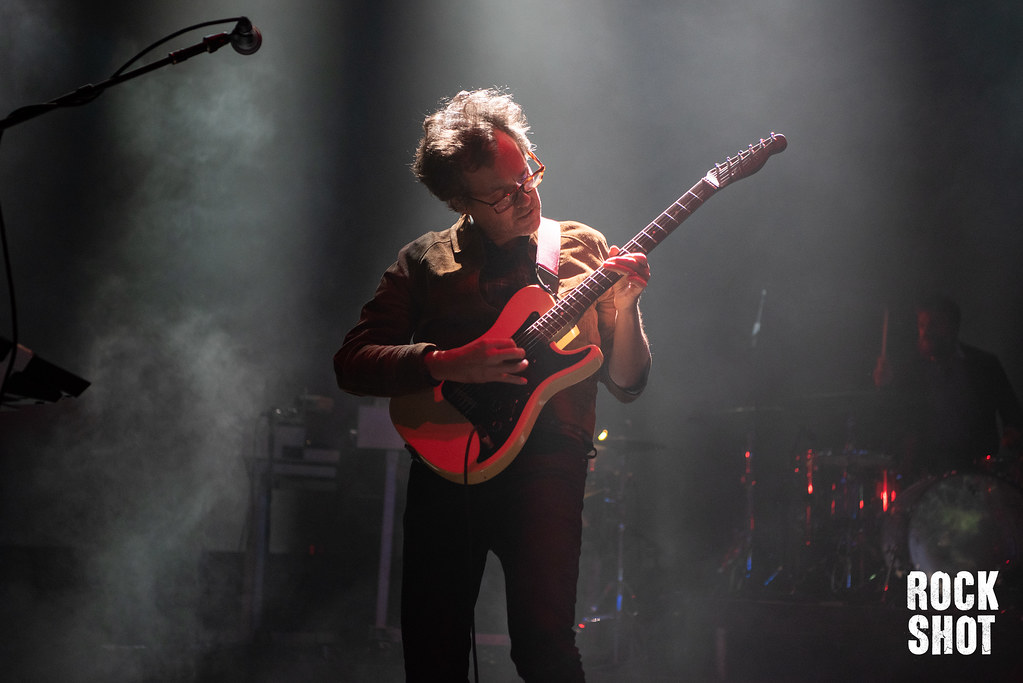 Proving they’re not afraid to dig even deeper, Phoenix continue to forgo new material for their 1999 honey-slick single Too Young. Deck d’Arcy’s keys adding the soft colour of their debut record’s single before the song is blended skilfully into more from Wolfgang Amadeus Mozart with Girlfriend. 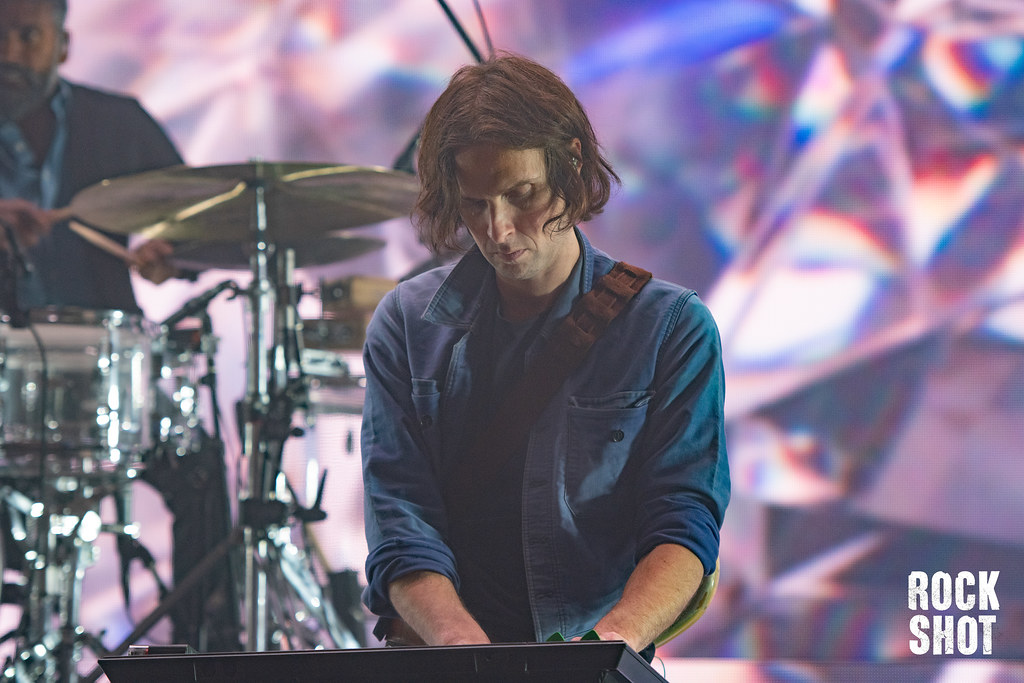 Moving to more recent times, but still not 2022, 2017 single J-Boy from sixth record Ti Amo is up next, the crowd slowly bopping along. 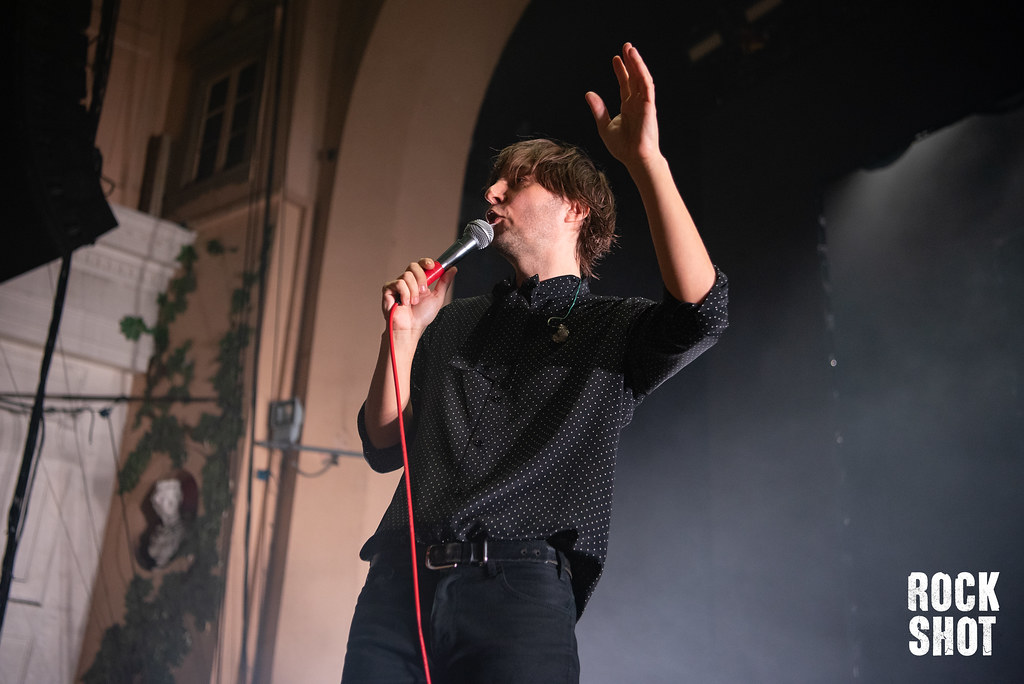 “We have new songs” the 45-year-old frontman teases, acknowledging the distinct lack of new music six-songs into their set. And as their seventh record’s title track Alpha Zulu kicks off, the elevated cheers from the crowd demonstrate just how much love there is tonight for the new alongside the favourites. 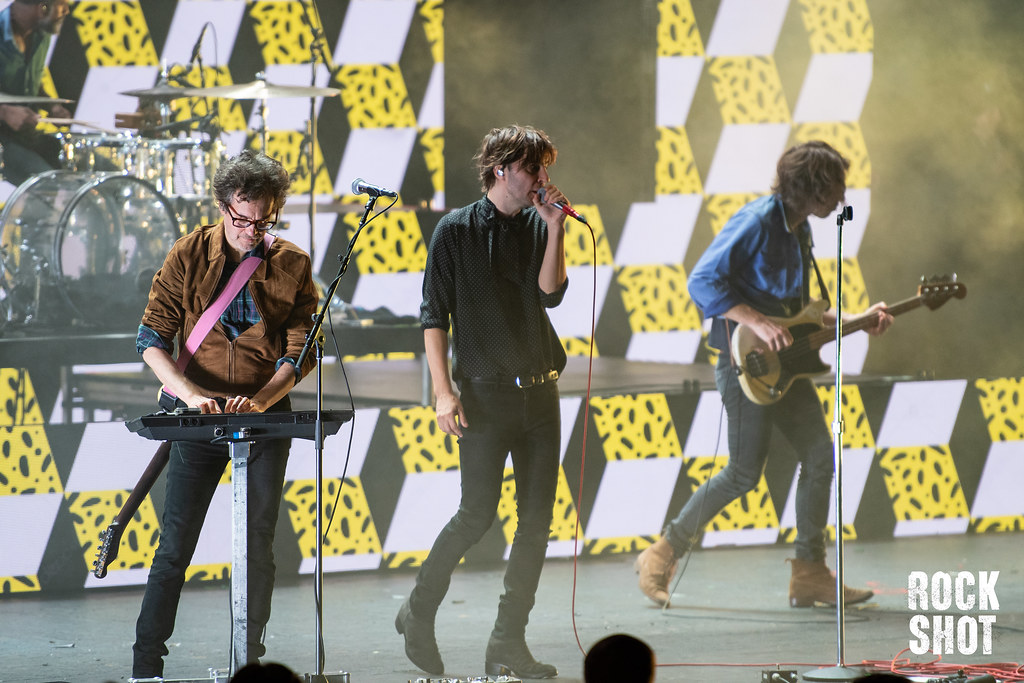 Ti Amo’s escalating intro allows the Brixton crowd to prepare for its crescendo, the bounce spilling out across the venue. Alpha Zulu tune After Midnight is a fantastic 1980’s throwback, the kind of uplifting, beat-heavy tune that you simply can’t stop moving along to, Thomas Hedlund making sure to beat the absolute crap out of his drums tonight. 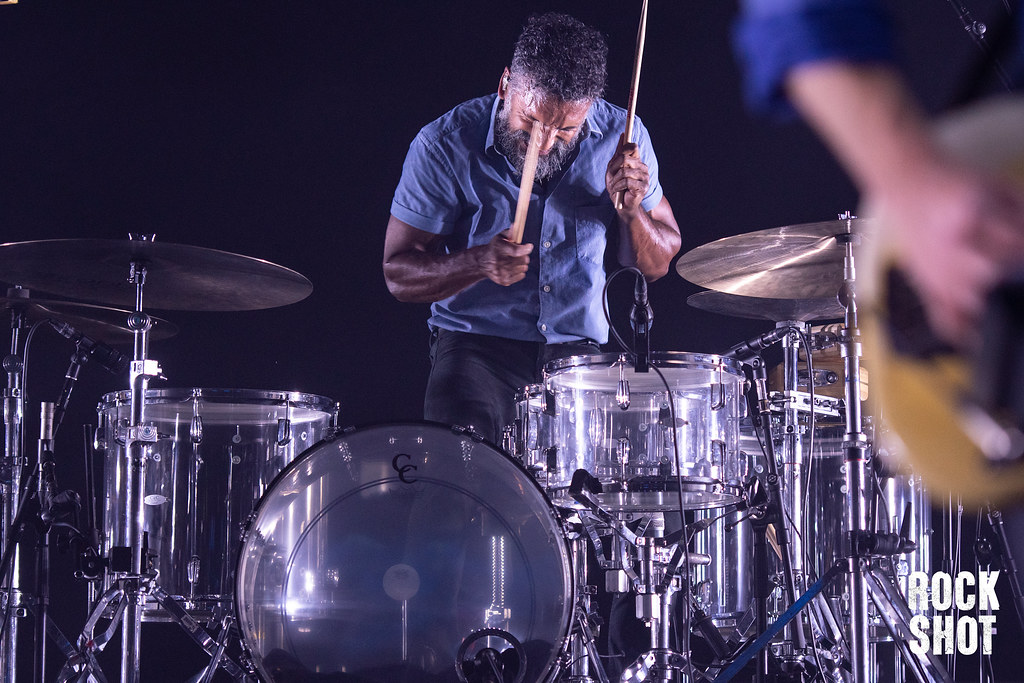 Armistice from their 2009 record has the crowd more than singing along with the rather wordy and (Phoenix-standard) nonsensical lyrics, which just adds to the joy of listening to them. Harpsichord breaks aren’t usual in modern music, but this song’s simply makes it. 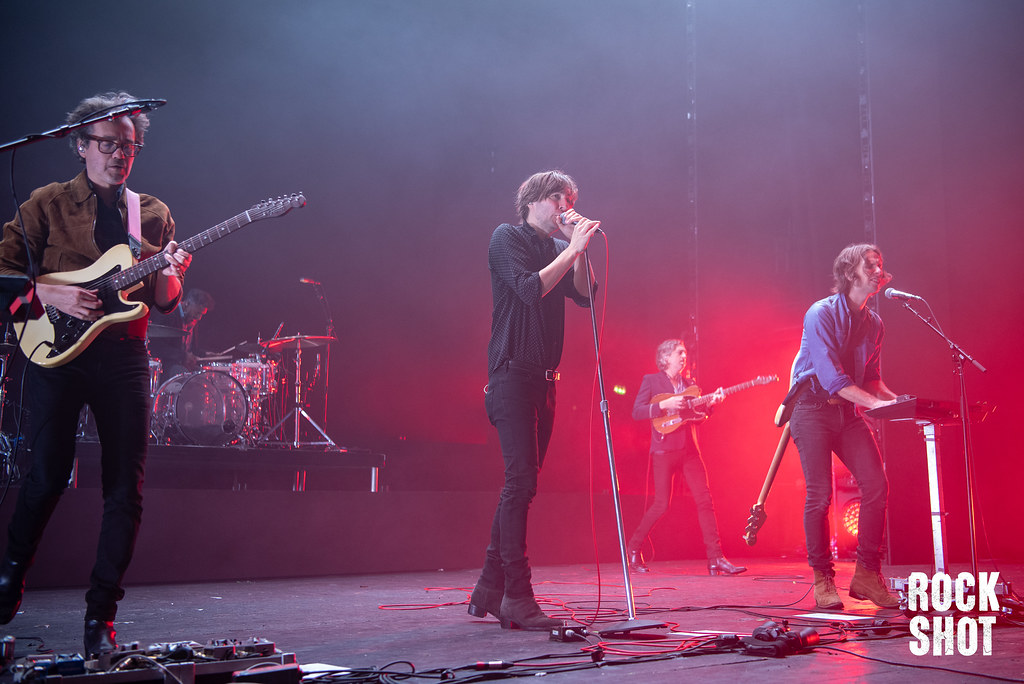 Thanking the crowd for keeping showing up, Mars says “London makes us nervous, I don’t know if you know that” before describing how they completely tanked their first London show. “It’s a really good thing no one knows about Tokyo Joe’s, because we failed miserably and every record company executive, every radio guy was down.” 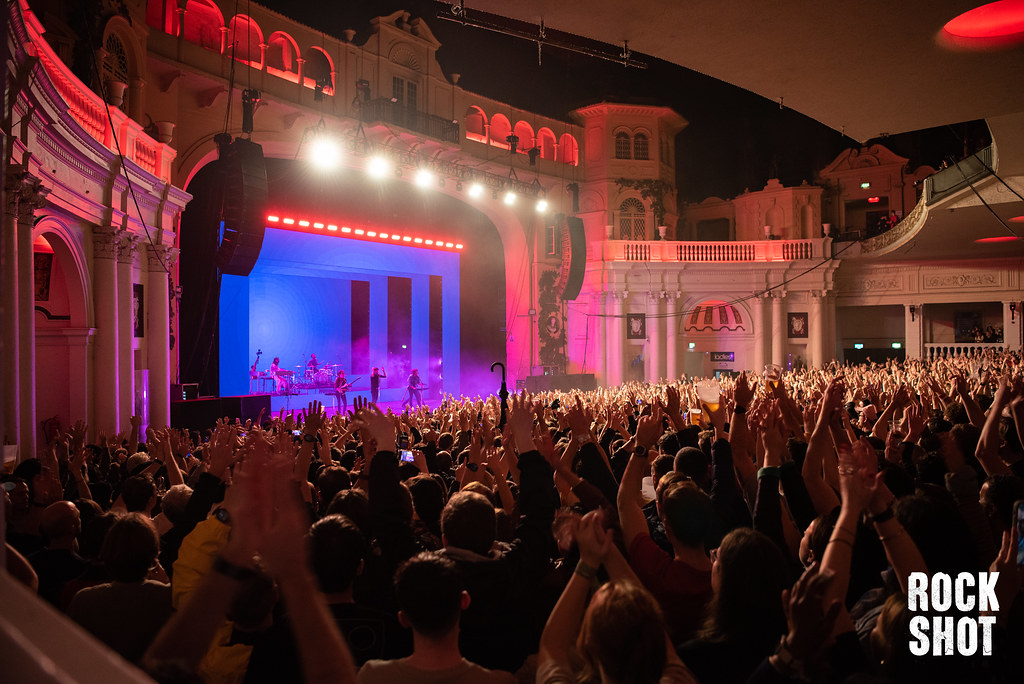 “We’ll always be nervous playing London, but we’re amongst friends” the frontman continues ahead of swaying Ti Amo tune Lovelife, which Mars asks his band to restart after mistakenly starting with its second verse. One of a handful of mistakes during tonight’s set is more endearing than unprofessional and makes us root for Phoenix even harder. 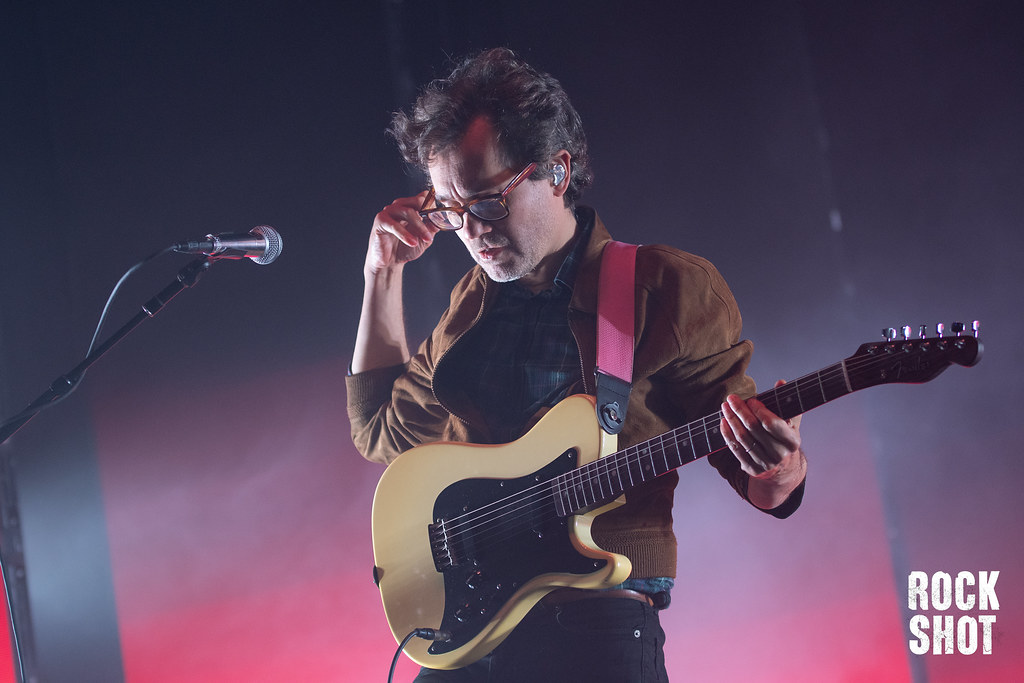 Alpha Zulu single Tonight is a highlight, regardless of Vampire Weekend’s Ezra Koenig not joining the group on stage, his vocal duties being covered seamlessly by Thomas Mars. But it is Wolfgang Amadeus Phoenix cut Rome next that pushes the Brixton crowd to the next level. 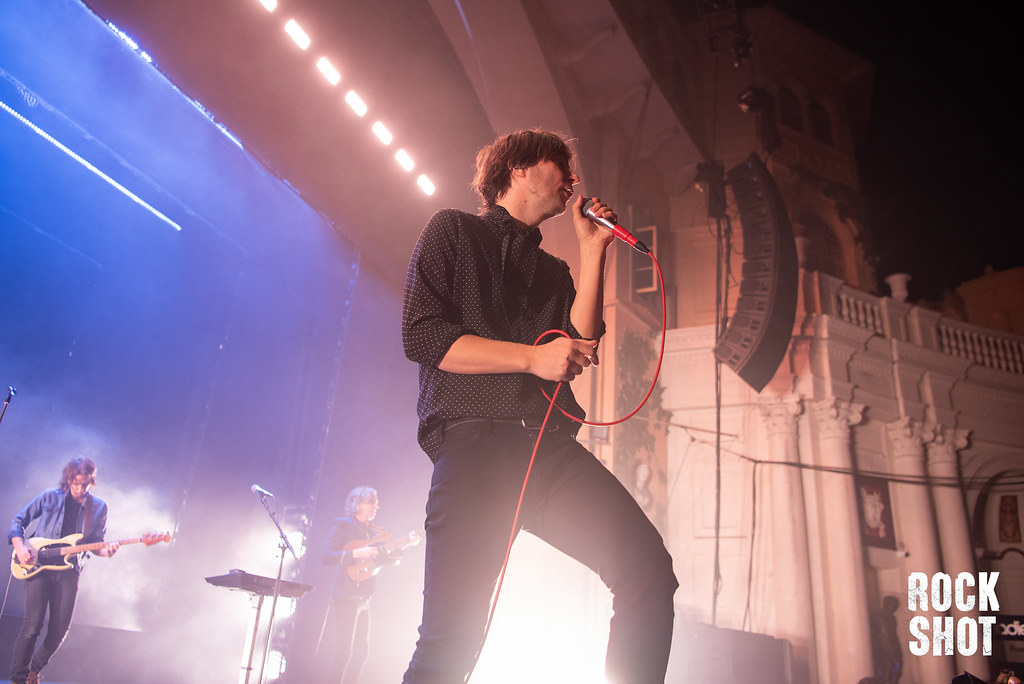 United cut If I Ever Feel Better proves to be another false start “We messed up, you did perfect” Mars tells his audience as the band restart the 2000 single which layers the album’s Funky Squardance across, a robotic voice atop of hard guitars seemingly something only contemporaries (and guitarist Laurent Brancowitz’s former Darlin’ bandmates) Daft Punk might have got away with but it works ridiculously well. 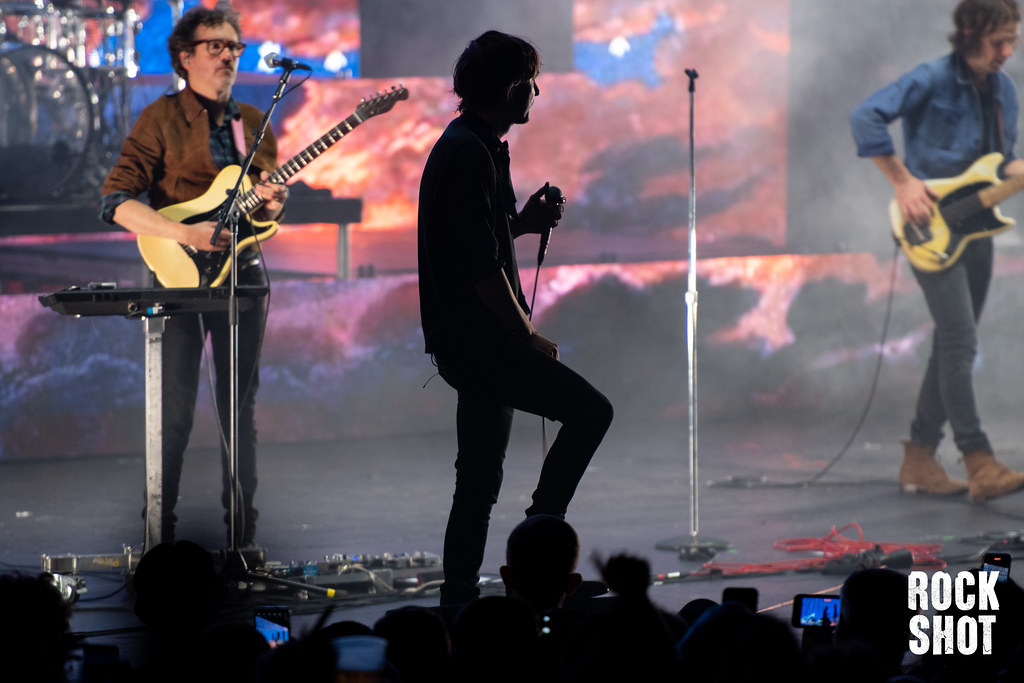 A brief interlude in proceedings (as the band wave their false goodbyes only to return moments later) is followed by Deck d’Arcy sprawled seemingly haplessly in front of a blue harpsichord, hiding behind shades and sipping from a brown bottle of beer then joined by frontman Thomas Mars for a toned-downed medley of Ti Amo cuts Telefono and (my favourite from the record) Fior Di Latte. Because why not write a ballad about mozzarella?! 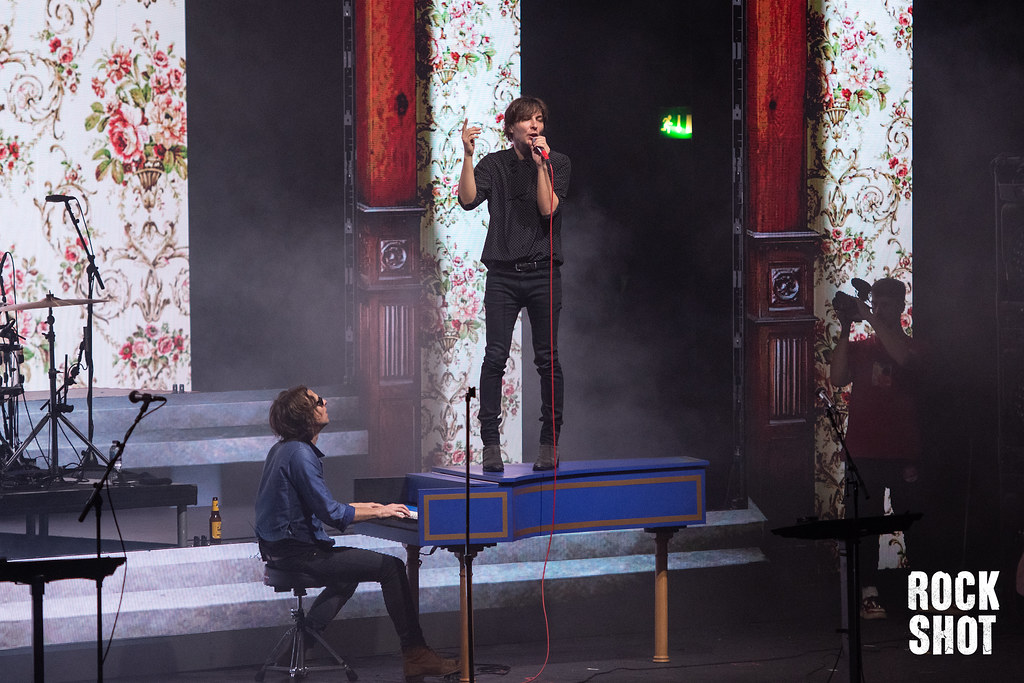 The night is closed out with 2009 hit single 1901 and Thomas Mars toning down his famous crowd interactions, this time wading slowly out into the Brixton crowd, being raised by his boots to stand among his people before expertly crowd-surfing back to the stage. 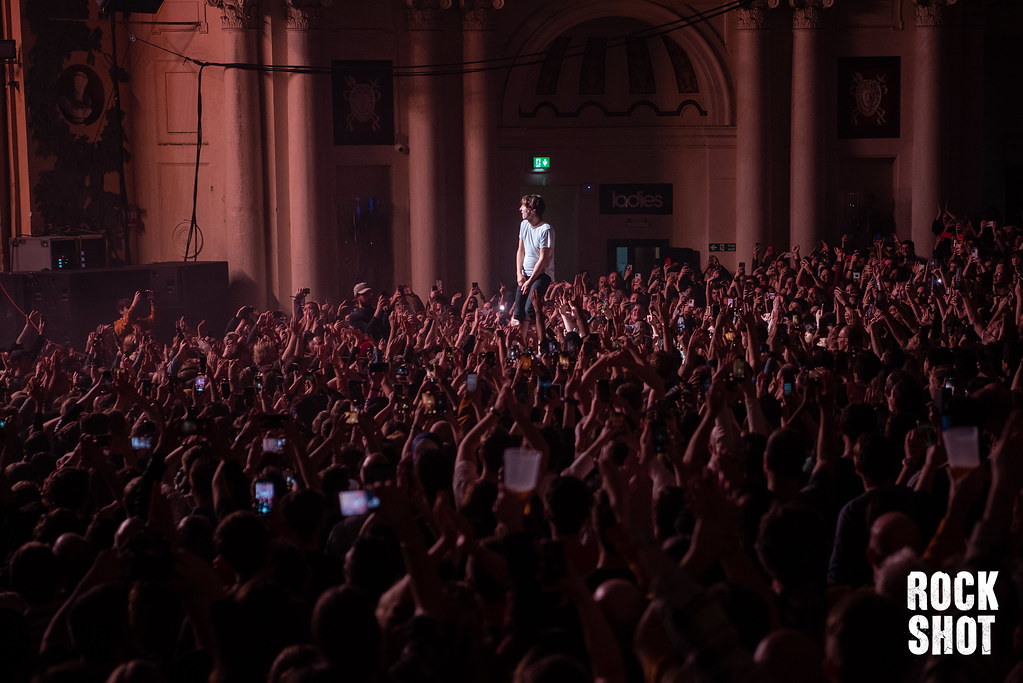 Given the group – that were formed when the majority of the group were just 10 years old – are hard to classify, but could lazily be shoved into a “chill” or “synth-pop” category, they work extra hard to ensure their music remains fresh and their live show is a production unlike most at venues the size of this one. 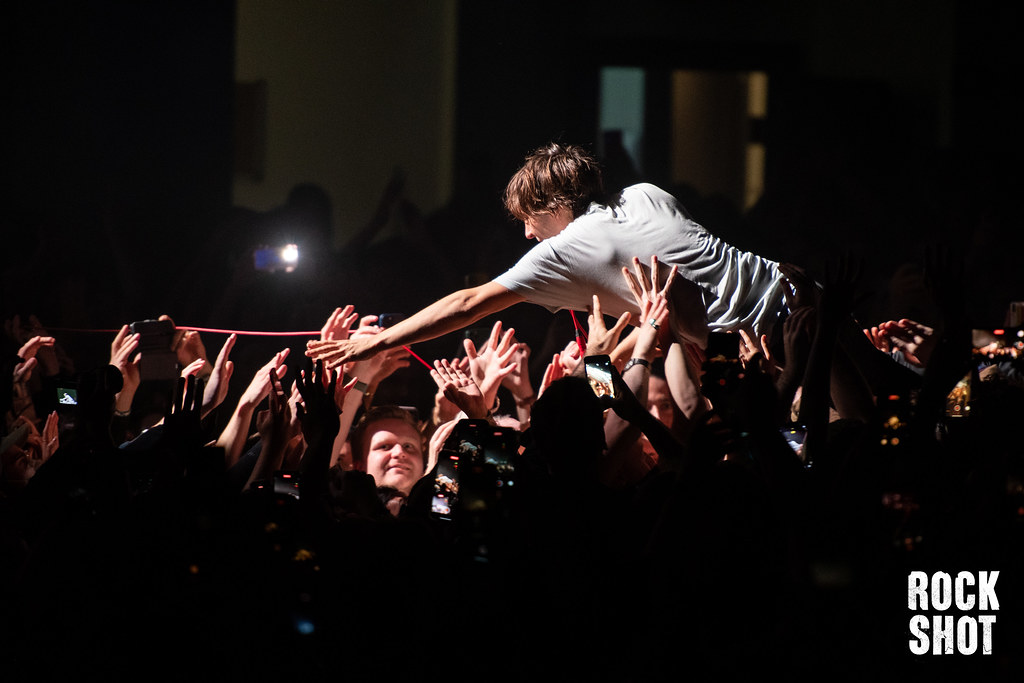